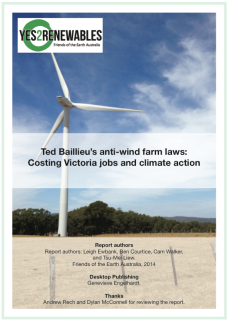 Friends of the Earth‘s recent report on the costs of anti-wind farm laws introduced by former Premier Ted Baillieu, and supported by the Napthine government, has put renewable energy on the state election agenda. The report highlights the double standards in Victoria’s energy policy: It’s one rule for fossil fuel generators and another for renewables.

This double standard has struck a chord in the Surf Coast region where a coal mine and power plant operates in close proximity to the town of Anglesea.

Residents who are sick of the pollution from the Alcoa-owned coal plant are building a campaign to Shut It Down. Alcoa want to sell the facility in the wake of the closure of the Point Henry smelter. Alcoa have submitted a license to generate electricity with the Essential Services Commission, which if approved, would allow the generator to dispatch electricity to the grid. The ESC is expected to announce it decision in months.

“The State Government’s anti-wind farm laws prohibited our project without any consultation or justification,” said Barry Mann of the Macedon Ranges Sustainability Group —the organisation behind the community wind farm proposal. “We’d love to follow in the footsteps of Hepburn Wind and build a community wind farm in Woodend.”

The Friends of the Earth research prompted responses from the major party candidates.  END_OF_DOCUMENT_TOKEN_TO_BE_REPLACED

The Intergovernmental Panel on Climate Change has today released its report on climate change mitigation – how to cut greenhouse gas emissions.

It follows hard on the heels an earlier report on the impacts from climate change which pointed to devastating effects on the poor and wildlife. This new mitigation report outlines what must be done if dangerous climate change is to be avoided. It represents a wake up call to the Australian governments, whose love affair with dirty fossil fuels is leading to disaster.

Here are five hard facts from the report:

If Australian politicians are serious about protecting us from the impacts of climate change they will heed the IPCC’s warnings and take action. END_OF_DOCUMENT_TOKEN_TO_BE_REPLACED

Friends of the Earth (FoE) have released a new report detailing the economic and environmental costs of Ted Baillieu’s anti-wind farm laws to Victoria.

The findings of the report – The Biggest Losers

The report findings raise fresh questions about the government’s wind farm laws as the state heads to the polls for a November election.

Voters will be paying close attention to where the parties stand on renewable energy. All available polling shows Victorians want more wind farms. The government’s anti-wind farm laws are an electoral liability.

The Labor party has already pledged to ‘rip up’ the Baillieu anti-wind laws. Will Premier Napthine act to restore fair laws for wind farms before it’s too late? END_OF_DOCUMENT_TOKEN_TO_BE_REPLACED

Last week, Victorian Premier Denis Napthine injected new blood into his frontbench in preparation for the state election this November, promoting member for Morwell Russell Northe as Minister for Energy and Resources.

Northe steps into the role at a time of great uncertainty surrounding  the energy sector. The Abbott government’s stacked RET Review clouds the prospects for renewable energy in the country and compounds the impact of  Victoria’s anti-wind farm laws. The rooftop solar boom continues to disrupt the business model of the big fossil-fuel-based energy companies and the last scrap of coal power’s social licence went up in the recent fire at the Hazelwood coalmine.

The context of energy policy (and politics) is well known. Yet Victoria’s new energy minister is Russell Northe is somewhat of an unknown quantity. Yes 2 Renewables had a look over Northe’s record to get a better sense of the man. Here’s what we found. END_OF_DOCUMENT_TOKEN_TO_BE_REPLACED 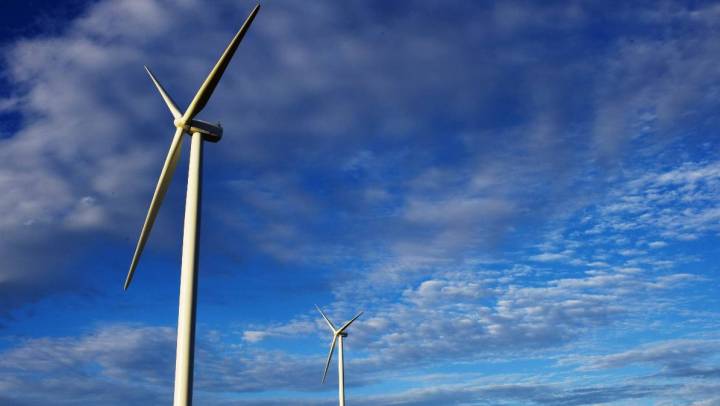 “The Planning Assessment Commission (PAC) OK’d all but one of the 150-metre tall wind turbines proposed on 26 properties 20 kilometres south of Orange,” report the Central Western Daily.

According to Infigen Energy, the $195 million project  “generate more than enough electricity to power all of the homes in Orange, Bathurst and the Blayney Shire.”

Meanwhile, it has been years since a project of this size has been approved in Victoria. A mere 24 turbines have been approved under the Coalition government since Ted Baillieu’s anti-wind farm laws took effect.  END_OF_DOCUMENT_TOKEN_TO_BE_REPLACED

Australia’s largest wind farm project has been given the go ahead by the South Australian government just days after Toyota announced its decision to end manufacturing in Victoria.

Victoria now faces a jobs crisis. Jobs created in the wind energy sector would have softened the blow of the declining manufacturing sector. Yet anti-wind farm laws introduced by former Premier Ted Baillieu has prevented new projects in the state.

END_OF_DOCUMENT_TOKEN_TO_BE_REPLACED 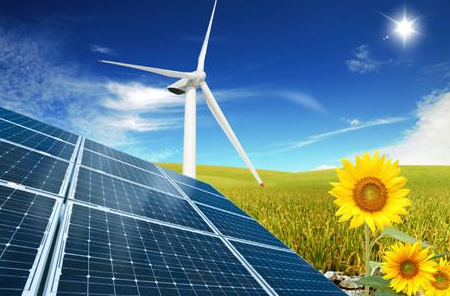 Yes 2 Renewables spotted this gem of a letter to the editor in the Melton & Moorabool Weekly. We liked it so much we thought we’d share it with you. Here’s David Bonnici’s ‘My Shout: Heat is on the Government’

I heard Premier Denis Napthine tell ABC Radio last week we face rolling blackouts and should each do our bit to save electricity during the heatwave.

His comments almost made me throw the radio through a wall – no mean feat when you’re driving.

The sun and wind are increasing our demand for the power that our brown-coal-fired power stations can’t meet when they could be a major part of the solution.

Yet our state government has all but banned new wind farms and removed many of the incentives for people to install solar panels and deliver surplus energy to the electricity grid.

Of course, the government will feel pressure to meet increasing demands as heatwaves get longer and hotter.

Ironically, it will most probably want to do this by building another dirty coal-fired power station.

People are putting two and two together. Climate change means more extreme weather events. And the best way to avoid worse heatwaves in the future is with more renewable energy. Premier Napthine and the Coalition government will be under pressure to scrap their anti-wind farm laws and adopt a support for renewables in 2014–a state election year.  END_OF_DOCUMENT_TOKEN_TO_BE_REPLACED

Yes 2 Renewables welcomes the Napthine government’s extension to the moratorium on fracking. The measure is a good first step toward a total ban that will protect farming communities, agricultural land and our environment.

Now that the Napthine government is making energy policy in the interest of the community, it can take another look at its anti-wind farm laws.

Planning amendments made by Premier Baillieu and endorsed by Dr Napthine ban wind farms in the windiest parts of the state.