The Abbott government has just released the Warburton review of the Renewable Energy Target. The report ignores the aspirations of Australians and would be a disaster for jobs and investment.

The Warburton Review has made two key recommendations that will devastate Australia’s renewable energy sector. The Review recommends the Abbott government:

This sham review recommends the Abbott government cut the Renewable Energy Target by up to 100 per cent.

Australians will be shocked that there are no options to increase the RET, only options to axe it.

The Warburton Review’s recommendations will kill off thousands of jobs and billions worth of investment in the Australian economy.

Research commissioned by the Clean Energy Council shows the 41-terawatt-hour Renewable Energy Target would unleash $14.5 billion worth of investment and create more than 18,000 jobs.

The renewable energy sector promises thousands of jobs at a time when national unemployment has hit a 12-year high. The Warburton review’s recommendations amount to economic vandalism. END_OF_DOCUMENT_TOKEN_TO_BE_REPLACED

Yes 2 Renewables readers will be aware of the strong pro-RET position taken by mayors Paul Hooper (Ararat Rural City) and Kevin Erwin (Northern Grampians), whom we met in May while on our RET Road Trip. The pair have joined forces with the Pyrenees Shire Council to pen a letter to Prime Minister Tony Abbott, calling on the 41-terawatt-hour Renewable Energy Target to be retained.

The Ararat Advertiser has thrown its’ weight behind the efforts of the Ararat, Northern Grampians, and Pyrenees mayors. In an editorial published this week, the paper warns of the local impacts of a weakened Renewable Energy Target:

END_OF_DOCUMENT_TOKEN_TO_BE_REPLACED 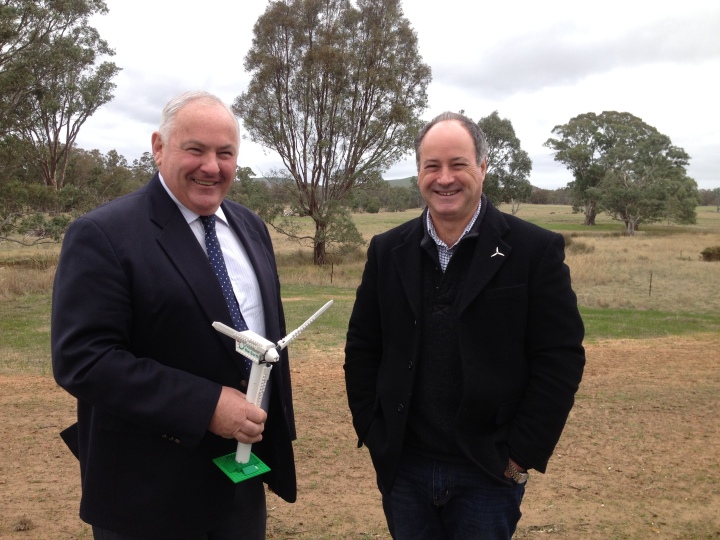 The mayors of Ararat, Northern Grampians and Pyrenees shires will write to Prime Minister Tony Abbott, calling for the 41-terawatt-hour Renewable Energy Target to be retained.

The Mayors from western Victoria fear a weakened Renewable Energy Target will kill off proposed wind farms in the region. For local councillors, that means jobs, investment, drought-proof income for farmers and rates are on the line.

Cr Erwin said the proposed wind farms were at risk if the Renewable Energy Target was wound back.

“The wind farms at Crowlands, Ararat, Bulgana and Stockyard Hill are potentially a $1.68-billion investment in our region that will provide $1.3 million a year in rates to our councils, $300,000 a year to community groups and create 60 direct and 74 indirect ongoing jobs,” he said.

The opportunities of renewable energy in western Victoria are not news to Yes 2 Renewables. We visited Ararat in May as part of our RET Road Trip.  END_OF_DOCUMENT_TOKEN_TO_BE_REPLACED

Clive Palmer’s surprise climate manoeuvre has sent a shockwave through the Abbott government’s policy agenda. After meeting with former US vice president Al Gore in the Parliament yesterday, Mr Palmer has stated his party’s support for the Renewable Energy Target, the Clean Energy Finance Corporation, and the independent Climate Change Authority.

This changed political landscape gives Prime Minister Tony Abbott a reason to back away from an anti-renewable energy agenda. Originally intended to rationalise cutting the Renewable Energy Target, the Warburton review is now the key to achieving this policy shift.

The Renewable Energy Target is driving a national transition to renewable energy. All available public polling shows Australians endorse this vision, with a recent Climate Institute poll finding 72 per cent support to retain or increase the renewables target.

A weakened Renewable Energy Target threatens peoples’ jobs, health, and aspirations; billions of dollars worth of investment in a vital emerging industry; and importantly, an effective climate change mitigation tool. When we consider these impacts, the lack of public support for cutting the target comes as no surprise.

Over the course of two months, Friends of the Earth undertook a fact-finding RET Road Trip. We travelled over two thousand kilometres to speak with eight communities who have benefitted from renewable energy or have been affected by fossil fuel pollution. We did this to get a real understanding of the impacts of energy policy.

Friends of the Earth wrapped up its fact-finding RET Review Road Trip at the Capital wind farm on Thursday June 19—right on Canberra’s doorstep.

We’ve travelled over two thousand kilometres to speak with communities who have benefitted from renewable energy or have been affected by fossil fuel pollution.

When it comes to a Australia’s energy future, the communities we spoke with want more renewable energy. They want politicians to support the existing 41-terawatt-hour Renewable Energy Target.

END_OF_DOCUMENT_TOKEN_TO_BE_REPLACED

In the last week of May, Friends of the Earth visited solar homeowners in affluent bayside suburb of Brighton East.

We had previously visited Victoria’s leading solar suburbs of Werribee, Hoppers Crossing and Point Cook. Our trip to Brighton East was to get a sense of what people in a long-standing Liberal seat think of the Warbuton Review and Australia’s energy future.

It turns out that there isn’t really any difference between the two. Like the residents of Melbourne’s western suburbs, the people we spoke with in the seat of Goldstein – the seat held by senior cabinet minister, Andrew Robb – see renewables as the future. The people we spoke with don’t want politicians to weaken the Renewable Energy Target.

Upon arriving at the Coats household in Brighton East we were presented with the inverter and a quick briefing on how much electricity the rooftop solar set up had produced to date.

The Coats’ 1.5kW solar energy system has made the home a suburban a clean energy power station. For the past five years, it has covered all of the household’s electricity needs.

“It’s fantastic knowing that we never have to worry about another electricity bill. In fact, our energy company owes us,” said Mrs Coats. “It also gives us a lot of pleasure to know that we’re producing our own clean energy and feeding it back into the grid for other people to use.”

Every solar homeowner I meet has an immense pride about their solar system. There’s a sense of achievement in generating your own energy and acting to address climate change. And, let’s not forget the power bill that is now perpetually in credit.

There are an estimated 2,792 solar homes in the seat of Goldstein. Solar has delivered $1.56 million worth of savings on power bills to those who have panels. In the wake of the Victorian government’s decision to reduce the feed-in tariff for solar, the Small-scale Renewable Energy Scheme (SRES) is the next best support mechanism for those with solar aspirations. END_OF_DOCUMENT_TOKEN_TO_BE_REPLACED

On May 22, Friends of the Earth visited Anglesea for the sixth leg of the RET Road Trip. The seaside town of Anglesea is best known for its surf and summer vacations. What’s lesser known is that Anglesea is home … END_OF_DOCUMENT_TOKEN_TO_BE_REPLACED

What did we find? In a nutshell: The suburbs get it. Solar is viewed as an indispensible new technology that is cutting power bills.

The Renewable Energy Target and other state-based incentives have helped homeowners in Hoppers Crossing, Werribee and Point Cook install a 8,052 solar photovoltaic systems and 14,213 solar hot water systems on their roofs.

One such homeowner is Coralee Klement, a retiree and Werribee resident. Coralee’s 8.3kW solar energy system has made the suburban home clean energy power station. It currently covers all of her energy bills, except for a small gas bill in winter.

“We couldn’t afford not to do it,” Carolee told us. “Electricity bills were getting too expensive. Even in winter we’re in credit with the energy company.”

“We went solar as an investment,” explains Ms Klement. “My super was getting a limited return and dwindling because of fees. The solar system has delivered a good return on investment as well as the environmental benefit to the community.”

The rooftop solar revolution has seen Australians install a massive 3.2 gigawatts of solar power spread over 1.3 millions homes. More than 3 million people now live in a home that generates clean electricity. If you’re looking for a metric for public support for the Renewable Energy target, this is it.

The solar suburbs have set their sights high. They have ambitions beyond intermittent generation. Solar homeowners like Carolee see the credit on their power bill and want to use it to save money on transport fuel costs.

“Once battery storage is available we’d voluntarily take ourselves off grid,” said Carolee. “We’d like to get an electric car one day to do away with the petrol costs.”

It’s this ambition that governments ignore at their peril. END_OF_DOCUMENT_TOKEN_TO_BE_REPLACED

By all accounts, Ararat is a community that proudly supports the wind energy sector. It is home to Pacific Hydro’s Challicum Hills wind farm which has been operating since 2003. Councillor Gwenda Allgood (recipient of our Renewable Energy Champion award) lauds the company for their exceptional community engagement. Add to this the drought-proof income for farmers who host turbines, and strong local support for wind energy comes as no surprise.

Yet there was another story we wanted to investigate in Ararat. With all the focus on budgets, we travelled to the region to find out from local politicians about how wind energy helps to keep the municipal budget in good health. END_OF_DOCUMENT_TOKEN_TO_BE_REPLACED

This article was published at Renew Economy.

Previous stops in visited Hepburn/Daylesford and Morwell, provided an insight into community support for renewable energy and the costs of polluting coal energy. Our trip to Victoria’s blustery southwest coast allowed us to investigate the ways in which renewable energy can provide a platform for economic development.

With its vast wind resource, southwest Victoria is among Australia’s most important renewable energy regions.

The area is home to Pacific Hydro’s Portland Wind Energy Project. The four-stage project will see 195MW worth of generation spread over five sites. Once completed the wind energy project will generate enough electricity to power 125,000 homes (a city the size of Geelong).

Drawing on Portland’s manufacturing base and engineering expertise and generating income for turbine hosts and the community, wind energy is an engine for economic activity for Victoria’s southwest.

Portland’s Keppel Prince Engineering is at the centre of the action. END_OF_DOCUMENT_TOKEN_TO_BE_REPLACED