This article originally posted at Clean Technica. View the original post here.  While Australia’s carbon policy seems to have hit a dead-end, good news from the renewable energy sector continues to pour in. The country will soon see construction begin … END_OF_DOCUMENT_TOKEN_TO_BE_REPLACED

This article originally posted at The Conversation. View the original post here.  Australia’s “carbon tax” is being axed – so what does it mean for you and for Australia? We asked Conversation readers to tell us on Facebook and Twitter what questions you’d like us to … END_OF_DOCUMENT_TOKEN_TO_BE_REPLACED

END_OF_DOCUMENT_TOKEN_TO_BE_REPLACED

Originally posted at The Conversation. View the original post here.

The recent start of construction on the first of two large-scale solar photovoltaic (PV) power plants in outback New South Wales shows the importance of renewable energy targets and funding.

The first, currently being built at Nyngan, will be the largest solar PV farm in the southern hemisphere, producing 103 megawatts at peak capacity. This will be enough to power more than 33,000 average New South Wales homes, roughly equivalent to taking 53,000 cars off the road. Both projects have received federal and state funding, and have benefited from theRenewable Energy Target.

The Solar Flagships Program, of which the Nyngan plant is the major part, will also deliver a further 50 megawatt plant at Broken Hill, providing a combined solar power output 10 times larger than anything else ever built in Australia.

END_OF_DOCUMENT_TOKEN_TO_BE_REPLACED 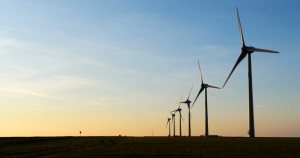 SECURING AUSTRALIA’S FUTURE: As the Commission of Audit reviews government activity and spending, The Conversation’s experts take a closer look at key policy areas tied to this funding – what’s working, what’s not and where current funds are best spent.

What does it mean to cut “waste” and “excess” in government climate change programs? END_OF_DOCUMENT_TOKEN_TO_BE_REPLACED 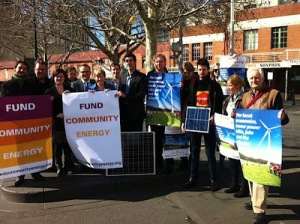 Yes 2 Renewables are a proud member of the Fund Community Energy campaign. The collaboration between the Community Power Agency, 40 community-owned renewable energy (CORE) groups from around Australia, and Yes 2 Renewables, has put the issue on the election agenda for the first time.

While the Greens have taken policy leadership by calling for a 100m community energy fund, yet it remains to be seen whether the Labor party and Coalition will support the burgeoning CORE sector.

Manny Pasqualini of Community Power Report was at the Melbourne policy launch. He writes: END_OF_DOCUMENT_TOKEN_TO_BE_REPLACED