Wind farms sit lightly on the land, taking up at most 1-2% of the area they cover, leaving the rest  available for farming, hunting, snowmobiling, hiking, grazing or any number of other uses including tulip farming (see below). Yet anti-wind lobbyists and campaigners persist in making the claim that enormous swathes of land would be and are consumed solely by wind turbines. END_OF_DOCUMENT_TOKEN_TO_BE_REPLACED 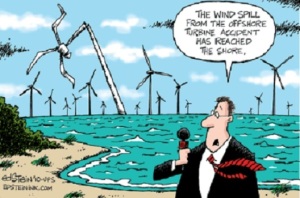 When it comes to criticising wind energy, you don’t need to exert yourself too hard to pass off opinion as a hard-earned scientific truth. There’s a good chance your claims will go happily unchecked and gloriously unchallenged. Just relax, and let your creative juices flow.

END_OF_DOCUMENT_TOKEN_TO_BE_REPLACED

On October 22nd, 1844, a man soared from the roof of a barn, with his eyes squeezed shut. William Miller, a Baptist preacher, had told him that Jesus would be returning to Earth on that specific day, and he leapt from his perch, expecting to be whisked upwards in a rapturous flurry of salvation. Jesus did not return, and the man was not saved.

As Miller gazed on the chaos resulting from what came to be known as the ‘Great Disappointment’, he was probably thinking deeply about the problems with prophecy. Namely, that he had chosen to predict something entirely out of his control. If Miller wanted advice on daunting foreshadowing, he may have benefited from the tactics deployed by Australia’s anti-wind lobby. END_OF_DOCUMENT_TOKEN_TO_BE_REPLACED 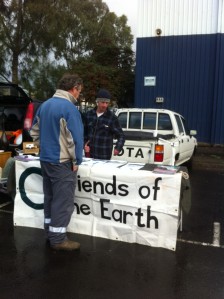 What did we find? A couple of enquirers had strong opinions on noise generated by wind turbines, however the majority of stall visitors were happy to sign Y2R’s petition calling on Premier Napthine to lift the restrictions on wind energy development and stop Coal Seam Gas extraction, despite the bad weather! One signatory from ‘down the coast’ said he loved wind energy so much he was planning on building some on his own property (not too coastal we hope!). END_OF_DOCUMENT_TOKEN_TO_BE_REPLACED

The Victorian Wind Alliance has today welcomed the approval of a new wind farm project near Bendigo – the first since the Baillieu anti-wind laws were passed.

The Coonooer Bridge wind farm – a small five-turbine project – was approved by the Buloke Shire Council overnight, the first to be approved since former premier Ted Ballieu’s restrictive laws were introduced in 2011. END_OF_DOCUMENT_TOKEN_TO_BE_REPLACED 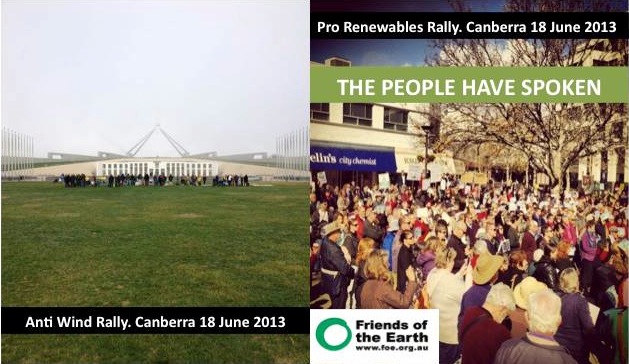 The verdict came on Tuesday, when renewable energy supporters went head to head with anti-wind energy campaigners in the nation’s capital. END_OF_DOCUMENT_TOKEN_TO_BE_REPLACED

Just how anti-renewable energy is the Coalition? That’s the question the multi-billion dollar Australian wind industry is asking this week, after reports that Liberal energy spokesman Ian Macfarlane is considering crippling new regulations for wind farms should the Coalition win government in 14 September.

The report, from The Guardian’s Lenore Taylor, tells of a Coalition proposal to require “real-time noise monitoring” on all existing wind farms.

The noise monitors would presumably transmit information to a website so local residents could check on turbine noise levels, to ensure they are meeting current regulatory standards. “If we have real-time noise monitoring and a resident sees that a wind farm appears to be exceeding its noise levels, the company will have time to do calculations and show whether the noise came from the turbines or other factors,” Macfarlane told Lenore Taylor. “If we don’t do this my concern is that the issues around wind farms have the potential to escalate into a community divide similar to coal seam gas.” END_OF_DOCUMENT_TOKEN_TO_BE_REPLACED 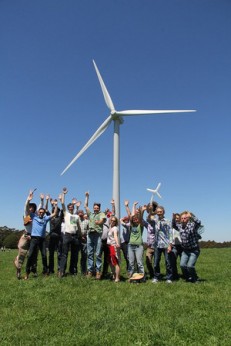 On Tuesday June 18, Coalition MPs will take the stage outside Parliament House with radio personality Alan Jones to demand a halt to wind power development and to advocate for the scrapping of Australia’s Renewable Energy Target.

Never before in Australia have we had organised opposition to renewable energy. That means it’s no longer enough to just support renewable energy. We need to demonstrate it. On Tuesday we can counter fear-mongering with hope, look to the future, not the past and show the way to a clean energy future.

Join us in Canberra on Tuesday and show your support for renewable energy. 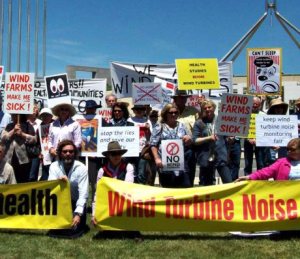 It’s time for another installment of Count the Whoppers. You may remember that we started this occasional feature a year ago with Max Rheese of the mischievously-named Australian Environment Foundation and Australian Climate Science Coalition, funded by the IPA and Heartland Institute respectively, and his fourteen whoppers in less than 1,700 words. We continued it in November with Senator John Madigan’s party policy on wind energy (subsequently removed), where he managed only 10 whoppers, but did it in a quarter of the words, 364.

This time the target in our sights is the anonymously written blog stopthesethings.com (STT). This site is setting new lows in the anti-windpower astroturfing arena, featuring new posts daily attacking all aspects of wind energy and the people associated with it with imaginary data and unpleasant prose. The author has been anonymously vilifying members of the wind industry, researchers into wind energy and proponents of wind energy for nearly six months.