The Intergovernmental Panel on Climate Change‘s  Fifth Assessment Report was released in late September 2013. A few days after its release the Australian Bureau of Meteorology reported that the year ending on September 30th was the hottest on record for almost all of South Australia; and a large part of Australia.

Climatologists tell us that extreme weather events are likely to become more common as climate change advances, such as the extreme winds that damaged bean crops in the Northern Agricultural Districts of South Australia on the 30th September and again on 2nd October.

When I first glanced at this graph I thought little of it; after all, it is about fossil fuel fired power stations and not renewables. But a little more thought shows that it gives us some very important information about the effectiveness of South Australia’s wind farms.

There are several important pieces of information relevant to renewable energy in this graph.

Second, and more importantly: The graph shows that the capacity factor of the coal-fired Playford B power station has declined to zero in the period 2009/10 to 2012/13. (It was the dirtiest power station in Australia in terms of carbon dioxide released per unit of electricity generated and has been ‘put into mothballs’). The graph also shows that the capacity factor of South Australia’s only remaining coal-fired Northern Power Station, the second biggest power station in the state, has declined from more than 90 percent to less than 50 percent in the period 2008/09 to 2012/18. The Northern is expected to only be used for the warmer half of each year before being shut down all together. END_OF_DOCUMENT_TOKEN_TO_BE_REPLACED

A 199-turbine wind farm has been proposed for South Australia’s Yorke Peninsula.  The location is ideal, being in a reliable wind area and only 70km from Adelaide (the link will include a 50km cable beneath St Vincent Gulf).

A group calling itself the Heartland Farmers and a South Australian politician, leader of the Liberals in the Legislative Council, David Ridgway, have been the most publicly active opponents of the project.  What is probably their main objection to the Ceres wind farm is the claim that it will impact the surrounding farmland by stopping access to aerial spraying, top-dressing, mouse bating, etc.

HF have claimed that 60 000ha will be impacted.  Mr Ridgway has gone even further with 80 000ha.  In fact the total area taken out of production due to the roads and hardstands of the wind farm will be about 90ha.

These outrageous claims have been ‘justified’ by claiming that agricultural aircraft cannot operate safely in the vicinity of wind turbines, a claim that has never held much credence for several reasons: END_OF_DOCUMENT_TOKEN_TO_BE_REPLACED

I have studied wind power as it is developing in Australia for more than ten years. In the early years of Australian wind power development – from the first wind farm at Esperance in 1987 to around ten years ago – there was practically no opposition to wind farms. Serious opposition is a phenomenon that has arisen in the last five years or so.

END_OF_DOCUMENT_TOKEN_TO_BE_REPLACED

The photo above, which I took on 28 June, 2011, has been used by the Liberals in the brochure “Wind farms can generate angst“. The brochure was published by Leader of the Opposition in the Legislative Council, David Ridgway.  I have no recollection of ever having been asked for permission for the use of my photo, nor would I ever have given it for the purpose for which the image was used.

The caption under my photo used in the Liberal’s brochure read “Construction of the Snowtown wind farm in South Australia’s mid north dwarfs the house in the foreground, demonstrating how close to residents the Government is willing to build wind turbines. Photograph taken by Dave Clarke, February 19th 2011.” The turbine is about 1.8km from the house, making a lie of the statement in the brochure (need I say that this is not the only lie in the brochure).

The use of this image, without asking me for permission, is quite unethical; but to use it dishonestly and misleadingly and claim it shows a wind turbine close to a house when this is quite false, compounds the abuse. END_OF_DOCUMENT_TOKEN_TO_BE_REPLACED 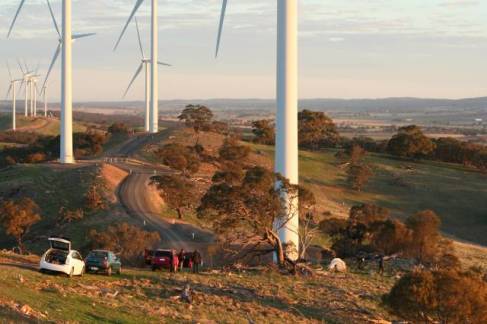 On the night of May 28, Mark Parnell (Greens MP for SA), Daniel Spencer, Leonora Herweijer and I (the latter three all being participants in the Walk for Solar Power – Port Augusta to Adelaide, September 2012) slept under the turbines at Waterloo wind farm.

Mark had a meeting with some people who objected to the Waterloo wind farm in the afternoon before the sleep-over.  I believe he visited one or more of the houses that the wind farm opponents claim have been abandoned due to noise from the turbines.

Mark is more generous than I am in that he keeps a very open mind to the claims by the opponents.  After having visited the township of Waterloo around ten times, listening for noise from the turbines and hearing nothing, I’m more inclined to think that the opponents are suffering from over-active imaginations.

Getting back to the night beneath the turbines, it was quite breezy, with the turbines operating all night and averaging about 60% of their 3MW installed capacity in the early hours of the morning.  At this time the sound that I was hearing was very similar to the sound that would be heard from a considerably stronger wind and no turbines, or the sound of heavy surf on a beach.

Of course we all had a good night’s sleep. Mark’s tent partly blew down – a windy ridge is not an ideal camp site.  I hardly need say that none of us suffered any ill effects from the experience. END_OF_DOCUMENT_TOKEN_TO_BE_REPLACED

A group calling itself Heartland Farmers is conducting a campaign against the Ceres Project wind farm proposed for Yorke Peninsula in South Australia.  Their opposition is mainly based on the claim that “If turbines are erected on farms in Central … END_OF_DOCUMENT_TOKEN_TO_BE_REPLACED

Signs that the Liberal Party is dominated by climate change deniers are becoming increasingly conspicuous: Famously, or infamously, Leader of the Opposition Tony Abbott has said that “Climate change is crap” and the Federal Opposition is implacably opposed to PM Gillard’s carbon tax while not having an alternative policy to lower greenhouse gas production that any economist seems willing to support. In August 2011 the Baillieu Victorian Liberal government placed in force new laws that will make further wind power development very difficult; Around the same time NSW Premier Barry O’Farrell said that “if I had my way, we wouldn’t … END_OF_DOCUMENT_TOKEN_TO_BE_REPLACED

Dr Sarah Edelman is a clinical psychologist, author and trainer. She worked for many years as a research psychologist and lecturer at the University of Technology Sydney. These days, in addition to her private practice Sarah conducts training programs for psychologists, medical practitioners, industry groups and the general public. She is a frequent guest on 702 ABC radio, and has contributed many articles in professional journals and in the mainstream media. Her book, “Change Your Thinking” (ABC Books) is a best seller in the self-help genre. She wrote the original of this piece as a comment on the recent Four … END_OF_DOCUMENT_TOKEN_TO_BE_REPLACED

I was disappointed to find that some people were handing around a petition against the building of the Crystal Brook Wind Farm at a recent working bee. The main objection, it seems, is NIMBY, they didn’t want them ‘all over our hills’. I wrote a new Net page in response.  (http://ramblingsdc.net/WhySupportWindPower.html) Why should we all be supporting wind power?  Simply because the results of climate change are almost unimaginatively dire and wind-generated electricity is one way we can quickly and easily cut the CO2 emissions that are largely driving climate change.   END_OF_DOCUMENT_TOKEN_TO_BE_REPLACED