There was lively debate at the forum, with Britnell drawing criticism after claiming that Victoria’s Renewable Energy Target (VRET) “hasn’t made any difference” a day ealier, as reported by the Portland Observer and picked up by the Warrnambool Standard. 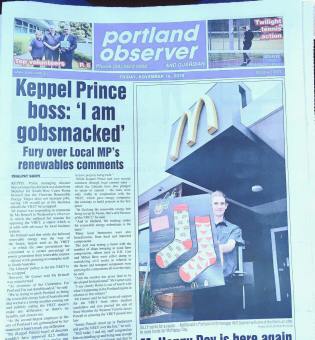 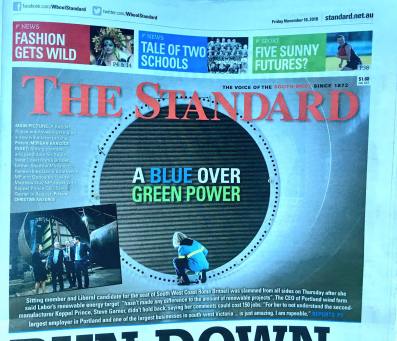 Prior to the forum a heated debate opened up in the local press, with Steve Garner, General Manager of Keppel Prince – Australia’s largest wind tower manufacturer and the region’s second largest employer – “gobsmacked” over Britnell’s comments.

After the forum was kicked off by MC Anita Rank and a Welcome to Country by Gunditjmara man Damien Bell, Mr Garner provided a stakeholder address, stressing the importance of the VRET for providing long-term certainty for business and pointing to Keppel Prince’s recent decision to hire an additional 61 workers.

In his presentation, Mr Garner noted the support of upper house MLC James Purcell for the VRET in the upper house.

Candidates were invited to present their vision and policies to grow renewable energy and act on climate change, with

.@RomaBritnell has a vision of the southwest coast region will be hub for renewable energy. #VicClimateSolutions #SpringSt #VicVotes

Despite the Liberal party’s pledge to axe the VRET, Roma Britnell said “the whole world is on the road to renewable energy” saying that under Matthew Guy the South-West Coast region would be a renewable energy hub.

Standing for the Greens, Thomas Campbell argued that thanks to advances in technology,  100 % Renewables is now achievable, presenting the party’s vision to reach that point by 2030.

In her presentation Labor candidate for South-West Coast Kylie Gaston said the community is embracing renewable energy, arguing “the proof is in the pudding” and citing Labor’s track record legislating the Climate Change Act and Victorian Renewable Energy Target.

.@CrKylieGaston says the “proof is in the pudding” on climate change and energy, cites Labor strengthening the #VicClimateAct and getting the #VRET in place. #PortlandForum #SpringSt #VicVotes

Before the session was opened up to audience questions, Local Jobs 1st’s James Purcell highlighted how his vote ensured the passed in the upper house in 2017, and his ongoing support for securing strong local content requirements as part of the policy.

Much of the QandA session focused on the Matthew Guy opposition’s pledge to axe the VRET, with Ms Britnell facing several questions from farmers and community members about the party’s position.

Despite insisting that the Liberal party supported a national target for renewable energy, it wasn’t clear exactly what the Matthew Guy opposition are doing to achieve greater certainty at the national level, with audience members pointing out recent chaos and dysfunction in national energy policy.

These views were echoed in a back-and-forth conversation between Britnell and Steve Garner from the crowd who said “If you’re going to rely on a national approach we run the risk of having nothing at all” as reported by the Portland Observer on Monday 19th Nov.

During the debate local member of the Knitting Nannas of Portland Colleen Brown called on Roma Britnell to lobby the Liberal party internally to change its position on the VRET, inviting audience members to sign a petition.

Other candidates also pushed back on the opposition’s view, with Thomas Campbell of the Greens highlighting that renewable energy is now the cheapest form of new energy, and Labor candidate Kylie Gaston arguing “we need to take leadership in this space”.

Despite the lively debate over renewable energy there was some agreement at the forum, with all candidates on the panel ruling out the use of fracking and agreeing that climate change is happening and must be acted on.

Renewable energy is clearly very popular in the community, and in Portland it’s a standout issue for many with local jobs at stake if the Matthew Guy opposition axed the VRET if elected.

Matthew guy’s pledge to scrap the VRET will see the party haemorrage votes at the November 24 election.

GET INVOLVED: Join the Y2R team at our regular collective meetings, every Tuesday at 6:20PM at Friends of the Earth Melbourne 312 Smith Street, Collingwood

BECOME AN ACTIVE FRIEND today to keep our campaign on the road and standing up for renewable energy, jobs and climate action.