Yes 2 Renewables welcomes the research, which shows the public is hungry for state action on renewables, and calls on the Andrews Government to show more ambition that it’s pledge of at least 20 percent by 2020.

Wind farms with a capacity of 2,336MW are already approved in Victoria. Building them would see the 20 percent target smashed.

We encourage the government to adopt ambitious and achievable target of at least 30 percent by 2020 to create jobs, unleash investment, and tackle climate change.

Victoria is already benefiting from increased investment and jobs due to the ACT government’s policies.  The ACT’s Renewable Energy Target is now building wind farms in Ararat and Coonooer Bridge.

Once the government locks in the VRET, Victoria won’t have to rely on the policies of other states and territories to build renewable energy projects. 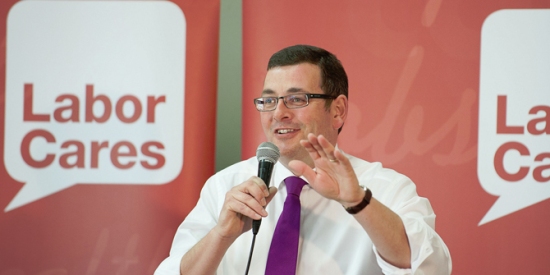 It’s clear an ambitious Victorian Renewable Energy Target from Premier Andrews will maximise the economic and environmental benefits for our state–jobs, drought-proof income for farmers, investment in regional areas, and reduced pollution, etc.

With benefits like this, it’s no surprise that poll after poll shows strong support for ambitious Renewable Energy Targets.

Will the Andrews government adopt ambitious Victorian Renewable Energy Targets so desired by the community? We’ll soon find out…