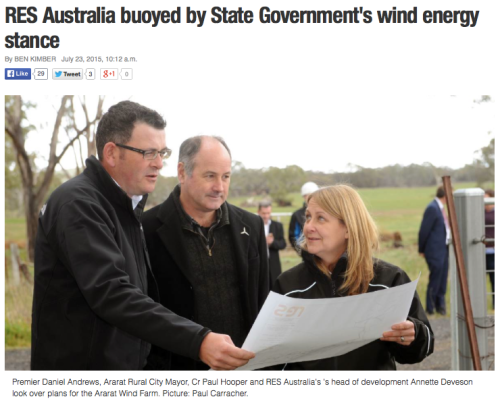 The call has won support from The Standard newspaper, Environment Victoria, The Victorian Greens, James Purcell MLA, and even Premier Daniel Andrews.

The chorus for reinstating a VRET has grown stronger with wind energy company, RES Australia, throwing their weight behind the proposal. The Ararat Advertiser reports:

RENEWABLE Energy Systems Australia has applauded signals from the State Government that it will go it alone on renewable energy.

Premier Daniel Andrews gave his strongest indication yet that Victoria could adopt its own Renewable Energy Target (RET) during a visit to the site of the Ararat Wind Farm last week.

RES Australia’s head of development, Annette Deveson, said it was encouraging the State Government was looking at similar arrangements to the ACT.

“I think it would be very positive and make Victoria even more attractive to renewable energy development,” she said. “There are great resources here, great wind speeds, good solar insulation, so solar projects are also a possibility.

With a Victorian RET that would be a very good supportive mechanism.”

RES Australia is the company developing the $450 million Ararat wind farm. Construction of the wind farm is underway thanks to the ACTs Renewable Energy Target of 90% by 2020.

The combination of national and state level targets building projects can ensure shovel-ready projects get built.

Yes 2 Renewables has long stated that a VRET could win cross-party support.

One only has to look at the Liberal MP Louise Staley’s support for the Ararat wind farm (under construction thanks to the ACT government’s RET scheme) to see the Victorian Liberal party is more inline with the community’s views on wind energy than their Federal counterparts.

The state government’s Renewable Energy Action Plan is due for release later this year.

We’re ramping up our campaign for strong and effective renewable energy policies in Victoria. Below are some simple things you can to to support Yes 2 Renewables.