At the turn of the decade, the anti-wind lobby escalated its campaign of exaggeration, cherry-picking, and scare tactics.

The orchestrated scare campaign surrounding the alleged health impacts of wind energy created confusion among communities, and in some cases divided them.

The impact of the anti-wind campaign has been documented by University of Sydney Professor of Public Health, Simon Chapman.

One study conducted by Chapman and colleagues found that of the 32,677 people living within 5km of Australia’s wind farms, just “…120 – or one in 272 – of them have ever made formal complaints, appeared in news reports or sent complaining submissions to government.”

Importantly, Champman et.al explain that the bulk of these complaints emerged around five wind farms that were “heavily targeted” by anti-wind farm campaigners. 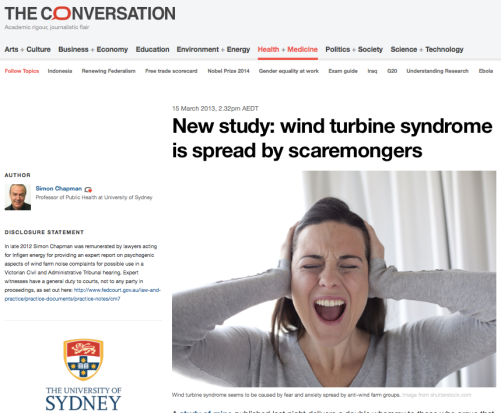 Another study by Fiona Crichton PhD candidate in psychological medicine at University of Auckland found that negative information about wind energy was affecting how people experience the technology.

“The findings indicate that negative health information readily available to people living in the vicinity of wind farms has the potential to create symptom expectations,” explains Crichton, “providing a possible pathway for symptoms attributed to operating wind turbines.”

Anti-wind campaigners are using the  inquisition to shift public opinion on wind farms. They draw on the deep reservoir of pseudo-science (as well as dubious material attacking the economic, technical, and environmental performance of wind farms) that exists on the internet to mount their argument.

This is the context in which the Australian Psychological Society has presented its view on wind energy. The following letter to the editor was published by The Courier (Ballarat):

ALTHOUGH there is no credible published evidence that wind turbines adversely affect human health, the anxiety about purported health impacts, distress about changes to the place where you live, and annoyance from the audible sound from turbines for some people living in close proximity, are some of the factors that can lead to stress-related symptoms which can be mistakenly attributed to infrasound.

And levels of annoyance have been shown to be strongly related to one’s pre-existing attitudes to wind farms.

The Australian Psychological Society has made submissions spelling out this evidence to government inquiries on the health effects of wind turbines.

While there is no doubt that stress symptoms can be unpleasant and distressing, it is inaccurate and ultimately unhelpful to demonise wind farms themselves.

It is decidedly in the public interest for wind turbines to be a part of the renewable energy mix to make the urgent transition away from fossil fuels.

Given the far greater health impacts of a continued reliance on fossil fuels for energy production (both in terms of unmitigated climate change, and the direct health effects of living near a coal mine), the evidence clearly suggests that wind turbines are likely to be more of a benefit than a burden to human wellbeing.

Dr Susie Burke’s letter and the society’s submission to the senate wind inquiry addresses the misinformation that surrounds this clean and safe energy technology. Their public comments will reassure members of the community who have been confused by the allegations made by anti-wind campaigners.

We encourage Senators John Madigan, David Leyonhjelm, and colleagues to give due consideration to the Australian Psychological Society’s comments on the matter.

One thought on “Aust Psychological Society: No evidence that wind farms affect health”