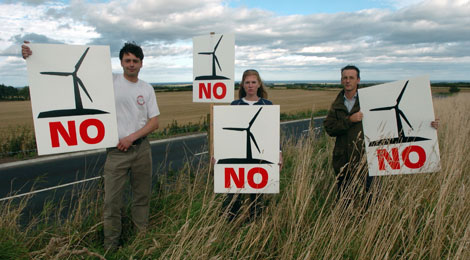 At the turn of the decade, the anti-wind lobby escalated its campaign of exaggeration, cherry-picking, and scare tactics. Just five years later, community members from regional Victoria are saying enough is enough.

Ararat local, Russell Pearse, calls out the tactics of anti-winders in a letter to the editor published in The Advertiser:

Ms Holmes (27/3/2015) has some issues with the granting of a planning permit for the proposed Bulgana Wind Farm, but is unlikely to find any allies in the community while resorting to factual exaggeration and emotive language which is more reminiscent of the infamous “Waubra Foundation”.

There is an inference that Council is incapable of approving such projects. That is why Councils employ staff and consultants to advise them on details, such as the inclusion of 15 special conditions regarding erosion control, which is mentioned as a potential issue.

Referring to “industrial wind factories” is a clue to the involvement of the anti-wind power movement, and their allies in the US Heartland Institute and it’s numerous spinoffs in Australia. Does a paddock become a factory by erecting a turbine within it?

Property values around wind farms have been studied for decades with results such as “neither the view of the wind facilities nor the distance of the home to those facilities is found to have any consistent, measurable, and statistically significant effect on home sales prices”- a decade long US study.

There are measurable benefits to landholders hosting wind towers, and also their communities. This has been well proven at the Waubra Wind farm already.

The mere mention of health affects is a perennial tactic of the ant-wind movement. Spread enough misinformation amongst enough people and sooner or later somebody will start claiming symptoms of what they’re reading about.

How come there has never been a problem at Challicum Hills Wind Farm where the nearest residence is 400m from a turbine? The same is true at Codrington and Yambuk.

I suggest that the residents of the Bulgana area relax and enjoy the benefits which come with hosting renewable energy production. It’s certainly better than the alternativehosting a coal mine. Russell Pearse, Ararat

On the other hand, opposition to the technology comes from the political fringe.

Senator John Madigan’s wind energy inquiry (witch-hunt) is the current manifestation of this dynamic. Fringe politicians who where elected on preference deals and only managed a a trickle of primary votes — such as Sen. Madigan, Sen. Bob Day (Family First), and Sen. David Leyonhjelm (Lib Dems) — are over-represented on the wind energy inquiry.

To ensure that the pro-renewable energy viewpoint of mainstream Australia is heard, we’re calling on people to take the following actions. Please, sign our petition setting our what a fair wind inquiry would look like, and make a submission expressing your support for wind farms.

4 thoughts on “Voices from Regional Vic: Enough with the anti-wind scare tactics”