The Australian and Senator John Madigan aren’t even pretending the current senate wind energy inquiry is impartial. Both have referred to the Senate Select Committee on Wind Turbines as an “inquisition.” 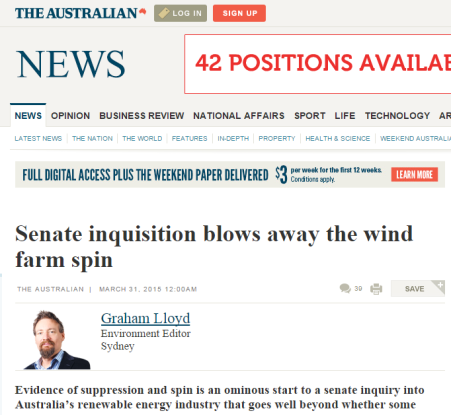 Based on these statements and the way the first public hearing unfolded in Portland on Monday March 30, it’s hard to conclude that the inquiry is anything but a witch-hunt.

Are we surprised? Not really… (After all, the Flat Earth Institute endorsed the “inquisition”).

Friends of the Earth are disappointed the committee is stacked with politicians with a track record of opposing wind energy. The committee’s composition brings into question the credibility of the whole process.

The senate committee is further undermined by the lack of attention it gives to other matters. The terms of reference fail to address:

Another Senate investigation into wind energy is a puzzling decision while the aforementioned issues go unattended.

If Senator Madigan wants the inquiry to have any credibility with the Australian public, then the final report must discuss wind energy in context. It will have to compare the technology to fossil fuels, consider jobs and economic benefits, and its contribution to tackling global warming.

If it fails to do so, then what public confidence there is in the inquiry will be eroded.