Texas which is a leading state when it comes to wind energy is aiming for an ambitious solar, distributed energy plan. Arguments against solar tech in the state are becoming out dated as the technology becomes cheaper to utilities.

This article was published in Reneweconomy. It can be found here.

Austin, Texas has approved a plan that could transform it into one of the largest centers of green, distributed energy in the country. It won’t set the city’s carbon footprint to neutral by 2030, as the city council proposed in August. But unlike that plan, it stands a better chance of being affordable over the long haul, municipal utility Austin Energy says. 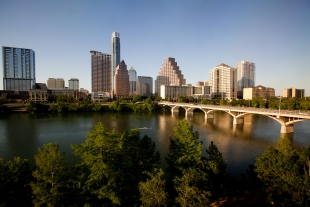 In a 6-1 vote late Thursday night, the Austin city council approved the utility’s 2025 Generation Plan, which calls for getting 55 percent of its generation from renewables, energy efficiency and other clean resources by 2025, up from 35 percent by 2020.

The plan approved with some amendments on Thursday night was slightly more aggressive than Austin Energy’s “500+” plan, which it presented in October (PDF). Still, it doesn’t go as far as the city council’s original plan, which asked for the complete closure of the utility’s Decker natural gas plant, and an accelerated schedule for closing its Fayette Power Plant. Under the plan approved Thursday, however, Austin Energy would replace the older steam units at Decker with a more efficient 500-megawatt combined cycle natural-gas-fired power plant, and keep a 2023 retirement date for Fayette.

This represents a compromise between environmental and clean energy advocates pushing for a more complete retreat from fossil-fuel-fired power, and a utility that protested that the city’s plan could expose its customers to financial risk. Specifically, Austin Energy laid out in an October presentation how its plan stacked up against Resolution 157 across best, worst and middle-of-the-road scenarios over the next decade, against the city goal of keeping rate increases under 2 percent per year.

Austin Energy got pushback on some of its assumptions. For example, the utility noted that its existing utility solar resources are actually costing it money today, compared to its gas- and coal-fired power plants, as an argument for its reduced goals for solar.

But solar advocates note that these older projects don’t represent the much lower-cost solar available to utilities today. Indeed, Austin’s newest 150-megawatt solar contract with Recurrent Energy was reported to have come in at an unprecedented 5 cents per kilowatt-hour.

In many ways, Austin’s final plan is like the one worked out between Southern California Edison and environmental advocates over how to balance green and natural gas alternatives in long-term grid planning for the western Los Angeles region. The Sierra Club, a key player in both proceedings, endorsed Austin’s new plan in a Thursday statement, calling it “among the most ambitious, environmentally and fiscally responsible generation plans in the nation.”

There are some big differences of course, including the fact that Austin is a much smaller municipal island in the larger Texas energy market, compared to SCE’s role in the West LA Basin region. As Austin Energy pointed out, it has little control over the carbon footprint of power available to it on that system.

Austin is also a hotbed for smart grid and distributed energy, with smart meters, EV chargers, smart thermostats and solar inverters on its list of devices to integrate into its operations. It’s also the home of the Department of Energy-funded Pecan Street Project, which is working with partners like General Motors, Intel and IBM. This connectivity, and the data it’s been collecting from it, could come in useful as Austin Energy starts to explore ways to link behind-the-meter energy assets into its long-range grid procurement plans.