Renewable energy is a mainstream election issue in the hotly-contested seat of Macedon.

Anti-wind farm laws introduced by the Coalition government in 2011 have hit the Macedon Ranges hard. A large-scale blanket ban on wind farms now cuts across the electorate. The anti-wind farm laws have cost the region jobs, investment and killed off a community wind farm proposal.

The community have shrugged off these overarching restrictions and are advocating to give wind a fair go. The community-owned Hepburn Wind farm are hosting a festival: Sleep Under the Stars, which is a celebration of renewable energy and a demonstration of support the community has for clean energy technology.

The pioneering Hepburn Wind farm will open its gates for a family-friendly festival of art, music and food on Saturday 15 November. (Extra information in the web flyer at bottom if this post).

Sleep Under The Stars is a celebration of renewable energy featuring the painting of Gusto (one of Hepburn Wind’s two turbines) by Ghostpatrol, star-gazing with astronomers, gourmet food trucks, live music from emerging artists, pedal powered cinema and more activities for the whole family.

The centrepiece of the event will be the completion of a 17 metre tall mural by internationally-renowned street artist, Ghostpatrol.

After their widely acclaimed 2013 mural on the turbine known as Gale, artists Ghostpatrol, Bonsai and team are returning to paint Gusto. The mural was made possible after a successful crowdfunding campaign raised over $10,000 from more than 75 wind farm and art fans.

Ghostpatrol, Bonsai and team will begin painting at the wind farm from Saturday 8 November. Final touches of the mural will be unveiled at Sleep Under The Stars.

Taryn Lane stated “We welcome everyone to come and experience camping out at the wind farm for the evening and seeing what Ghostpatrol and team create on our second turbine, Gusto.”

Visitors are welcome to attend for the evening and optionally stay in either their own tent or hire a luxury camping tent.

Hepburn Wind has been recognised with awards such as the Premier’s Sustainability Award, the Banksia Award and the World Wind Energy Award for its unique approach to community engagement.

Sleep Under the Stars is sponsored by Red Energy, which purchases the clean energy produced by Hepburn Wind and has created a shared product called the Community Saver that directly benefits the local community. 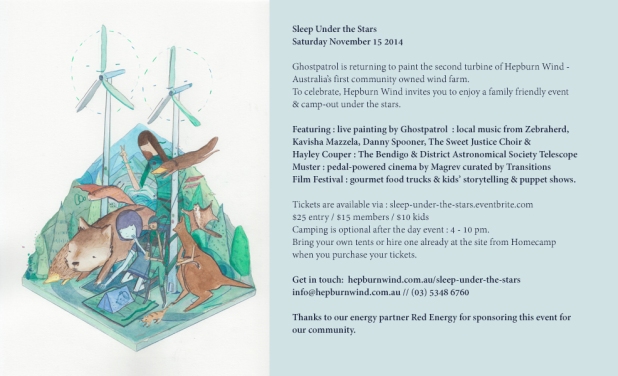 One thought on “Hepburn Wind to host community festival of art, music and food”