Renewable energy is a mainstream election issue in the hotly-contested seat of Macedon.

Anti-wind farm laws introduced by the Coaltion government in 2011 have hit the Macedon Ranges hard. A large-scale blanket ban on wind farms now cuts across the electorate. The anti-wind farm laws have cost the region jobs, investment and killed off a community wind farm proposal. 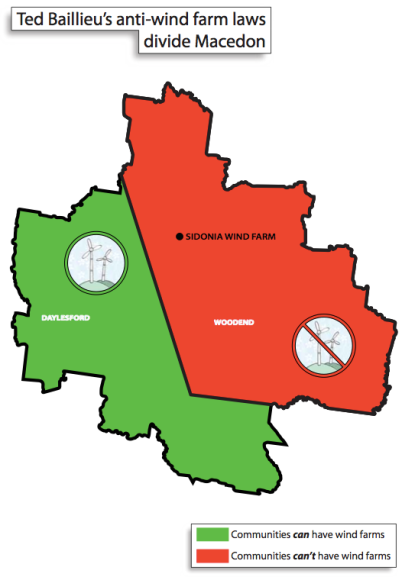 The Coalition government’s anti-wind farm laws have had adverse impacts beyond the Macedon Ranges. Barry Mann of Woodend took issue with Premier Denis Napthine’s claim the wind energy sector was to blame for recent job losses. In a letter published by The Age, Barry Mann links the retrenchment of 100 wind workers to restrictive planning laws for wind farms:

The Premier’s comments regarding the loss of jobs from Keppel Prince Engineering (in his own constituency) are disingenuous at best and, at worst, ignorant of the adverse economic effects of his own policy. He blames the wind power companies for importing cheap towers from overseas (likely made from our iron ore). This suggests that the wind companies fortunate enough to still have something to build in Victoria are drastically cutting costs.

Why would they do this? The answer lies in the wind planning provision (VC82) which prohibits wind energy in so-called “no-go zones”, places state-wide individual veto powers within two kilometres (not applied to any other industry) and basically restricts the use of wind energy to on-site only. This has resulted in the virtual destruction of Victoria’s wind energy sector. These companies have recognised that they have no future under such an oppressive regulatory regime.

Premier, when your government comes down so hard on an industry, can you blame them for doing what they have to do to survive? Now Keppel Prince Engineering has to do the same.

So where to the parties stand?

When it comes to removing roadblocks to renewables, the Labor party has vowed to ‘rip up’ the Coalition government’s anti-wind farm laws. The Greens also support restoring fair laws for wind farms in the state. The Liberal candidate for Macedon, Donna Petrovich, as well as Liberal MLC Simon Ramsay, has flagged community wind farms could be exempted from the restrictions on wind farms. 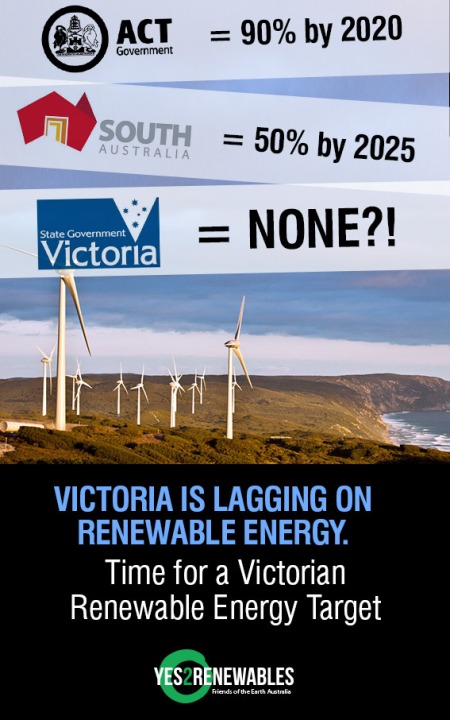 When it comes encouraging the rollout of renewables, The Greens have endorsed our call for a Victorian Renewable Energy Target that works alongside a national RET scheme. The party calls for the establishment of a ‘for-profit’ Solar Bank owned by Victorians to help the state reach its 5 per cent solar target by 2020.

The Labor opposition has offered conditional support for a Victorian Renewable Energy Target. Labor’s Back to Work policy commits the party to “Establish a $200 million Future Industries Fund to drive the six high-growth sectors” including “new energy technologies.” The opposition also announced a $200 million Regional Jobs Fund that will support job-creating projects, including “companies investing in renewable energy.”

The Coalition still has time to adopt pro-renewable energy policies before November 29. The window of opportunity is there, but it’s closing.

2 thoughts on “Voices of Macedon: Look close to home, Premier”