The Coaltion’s anti-wind farm laws have hit the Macedon Ranges hard. They have cost the region jobs, investment and killed off a community wind farm proposal.

The seat of Macedon was previously united by uniform planning laws that enabled community engagement in the development process. But since 2011, the region has been subjected to smothering regulations. A large-scale blanket ban on wind farms cuts across the electorate.

On August 30, the third anniversary of the Coalition’s anti-wind farm laws,Yes 2 Renewables, the Macedon Ranges Sustainability group and community members gathered on the border of the “no-go zone.” We sought to demonstrate the arbitrary nature of the Coalition’s wind farm ban.

Woodend local Rebecca Colless joined us on that day. Rebecca explained why in letter published by The Midland Express:

I am in the photo that appeared on the front page of (Macedon Ranges Guardian sister paper) TheMidland Express this week, calling for an end to the ban on wind turbines in the Macedon Ranges (and elsewhere in Victoria).

I’m certain that the ban is based on fear-mongering to protect vested interests and that wind turbines rarely cause fires- the CFA rates them low risk – whereas the residents of Morwell are certain that coal mines burn like hell.

I’m certain that the ban keeps us dependent on polluting fossil fuels and in-creases the clear and present danger of climate change.

I’m certain that the ban means Australia gets left behind while smarter countries develop renewable energy technology and industries.

I’m certain that in the next state election, I will vote for a candidate who will lift the ban.

When one considers the passion and the polling, it’s clear that the parties with a pro-renewable energy stance will have an advantage on polling day.

The Labor party and The Greens are committed to ‘ripping up’ the anti-wind farm laws and restoring fairness to the planning scheme. The Coalition still has time to adopt a pro-renewable energy policy before November 29. The window of opportunity it there, but it’s closing.

The Macedon Ranges Sustainability Group, Yes 2 Renewbles and Woodend Cycles are pleased to present Ride 4 Renewables on Saturday 18 October. Join us on  to see the location for what could be the next community wind farm in Victoria (provided those pesky wind bans are dumped!)

When: 18 October 10.30am
Where:  Starting at Black Forest Timber Mill on Black Forest Drive to the site of proposed community-owned wind turbines in the pine plantation off Fingerpost Road. There will be a photo opportunity before the return ride to Black Forest Timber Mill. (13km round trip).
RSVP: Book your tickets now at www.mrsgonline.org.au/r4r and share the Facebook event here.
Contact: For further details contact R4R@mrsg.org.au. 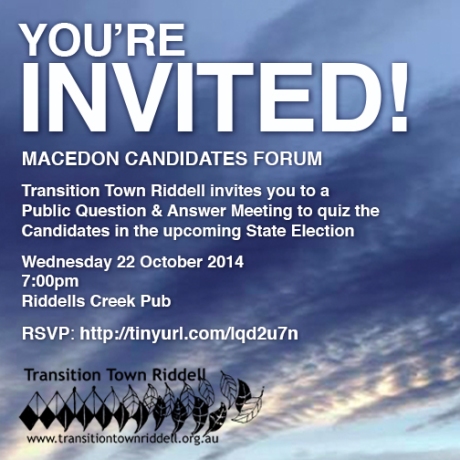 Want to ask your candidates about the issues that matter to you? This is your chance.We’re told Transition Towns Riddell will host a election forum featuring Labor, Liberal and Greens candidates for Macedon. This will be a rare chance to see compare and contrast the policies of major party candidates.

3 thoughts on “Voices of Macedon: Wind farm ban is “unfair””