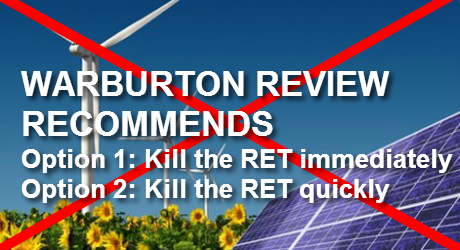 The Abbott government has just released the Warburton review of the Renewable Energy Target. The report ignores the aspirations of Australians and would be a disaster for jobs and investment.

The Warburton Review has made two key recommendations that will devastate Australia’s renewable energy sector. The Review recommends the Abbott government:

This sham review recommends the Abbott government cut the Renewable Energy Target by up to 100 per cent.

Australians will be shocked that there are no options to increase the RET, only options to axe it.

The Warburton Review’s recommendations will kill off thousands of jobs and billions worth of investment in the Australian economy.

Research commissioned by the Clean Energy Council shows the 41-terawatt-hour Renewable Energy Target would unleash $14.5 billion worth of investment and create more than 18,000 jobs.

The renewable energy sector promises thousands of jobs at a time when national unemployment has hit a 12-year high. The Warburton review’s recommendations amount to economic vandalism.

In April, Friends of the Earth invited Dick Warburton on a fact-finding RET Review Road Trip to meet with communities affected by fossil fuels or benefitting from renewables. Dick Warburton refused the invite.

The Warburton review is out of touch with the views of Australians. It ignores the community’s aspirations for a clean energy future.

Polling shows 73 per cent of Australians think the Renewable Energy Target target is ‘about right’ or ‘not high enough’. For Coalition voters the number is 64 per cent. A recent poll in The Australian found 95 per cent of respondents thought renewable energy was a “good idea.”

With a Victorian state election on the horizon, voters want to know what plans the major parties have to secure renewable energy jobs and investment.