Math is important.
Cast your eyes to the tweet below, courtesy of the Australian Petroleum Production & Exploration Association , or APPEA:

APPEA’s Natural Gas website  is linked at the bottom of the image. The website features a gigantic flame, in case you were in any doubt as to what they’re all about.

There’s an  undercurrent of antagonism towards renewable energy on the page, so it makes sense that, in an effort to compare the land use needed for gas extraction, they’d pick wind farms and solar panels as their comparison technologies.

The troublesome thing here, for whoever it was that made that infographic, is that wind farms actually have an incredibly low impact on land. Once the machines are up, farmers can continue to use the land in and around wind farms, for agriculture and stock. This is a wind farm in the Netherlands, nestled amongst a Tulip farm:

In the infographic, APPEA claim that you’d need six turbines, each of three megawatt capacity, to generated fifty two gigawatt hours a year (enough to power around 8,000 homes). They claim that these six machines would covered a total of 2.5 hectares. For this to be the case, the coverage of each turbine would have to be 4,167 square metres, with the tower having a diameter of 72 metres. 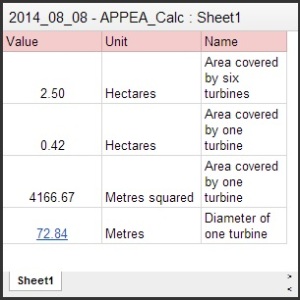 As you may know, a wind turbine tower isn’t 72 metres wide. If it were, it would mean each of the sheep in this photo has a length of around 28.8 metres

If the sheep in that photo truly are 28.8 metres long, that’s about 2.3 standard bus lengths. They’re probably not. I think its more likely APPEA got their calculations wrong.

The UK’s Department of Energy and Climate Change released this infographic  last year: 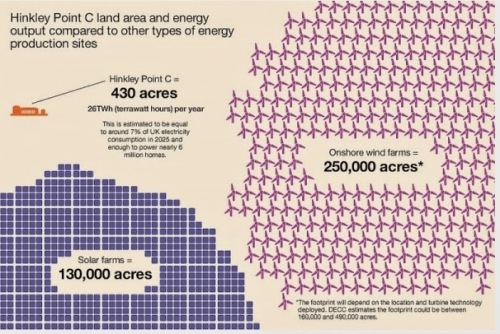 It was hastily taken down, after the DECC faced criticism. It’s a little harder to figure out the calculations they’ve used here, but we can do a rough estimate: 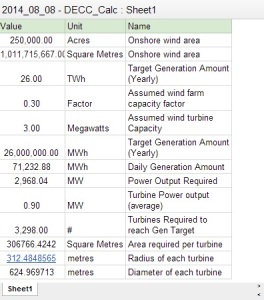 ……625 metres wide? Surely, they’re forgotten a zero? They haven’t. They’re assuming that the land impact of a wind farm incorporates everything within the boundary of the farm, rather than the actual machines. As I mentioned earlier, it’s sneaky and dishonest – you can still use the land around the pad of the tower.

If you’re still suspicious, here’s an overhead view of the Capital and Woodlawn wind farms. Obese, land-destroying death machines? Or, relatively small towers of steel that convert wind to electrical energy? You decide.