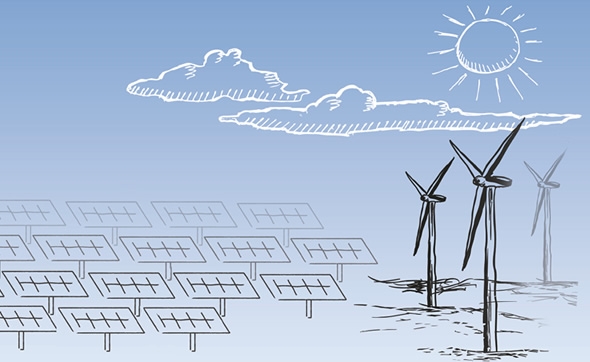 July 1 (Bloomberg) — Renewable energy may reap as much as two-thirds of the $7.7 trillion in investment forecast for building new power plants by 2030 as declining costs make it more competitive with fossil fuels.

About half of the investment will be in Asia, the region where power capacity will grow the most, according to the forecasts in a report released by Bloomberg New Energy Finance today. That will help global carbon dioxide emissions peak by the end of the next decade the London-based researcher said.

A glut of solar and wind manufacturing capacity has brought down prices of cells and turbines. That’s making clean energy plants in more locations profitable even though governments from Germany to the U.S. are scaling back incentives. Annual investment in technologies such as solar, wind and hydropower surpassed fossil fuels for the first time in 2011.

“What we are seeing is global CO2 emissions on track to stop growing by the end of next decade, with the peak only pushed back because of fast-growing developing countries, which continue adding fossil fuel capacity as well as renewables,” Michael Liebreich, chairman of BNEF’s advisory board said.

Fossil fuel’s share of power generation will shrink to 46 percent from 64 percent now, New Energy Finance said. It estimates 5,000 gigawatts of power generation capacity will be added globally. Coal, gas and oil-fired plants will only account for about 1,073 gigawatts, with much of that put in developing countries where power demand is growing most.

Solar power will top clean energy installations in every region over the next decade and a half, the report said. Capacity will expand the most in Asia, where new solar sites will exceed gas and coal combined.

“The period to 2030 is going to see spectacular growth in solar in this region, with nearly 800 gigawatts of rooftop and utility-scale PV added,” Milo Sjardin, BNEF’s head of Asia Pacific, said in the report. “This will be driven by economics, not subsidies, as our analysis suggests that solar will be fully competitive with other power sources by 2020.”

Overall, solar and wind power will increase their combined share of global generation to 16 percent in 2030 compared with 3 percent last year. Large-scale hydropower has the biggest share of power generation among non-polluting sources.

Gas-fired generation will survive the renewables boom, with installations growing because the fuel produces less pollution than coal and because supplies are abundant given shale gas discoveries in the past few years.

Coal plants will fare much worse, with capacity shrinking in Europe and the Americas as tighter emissions rules start to bite. Coal capacity will only grow in Asia to support the region’s quicker economic growth, the researcher said.

In all, about $5.1 trillion of the total investment will be spent on renewables including hydro power. Asia will account for $2.5 trillion of that, the Americas $816 billion and Europe $967 billion, New Energy Finance said, The Middle East and Africa will invest another $818 billion.