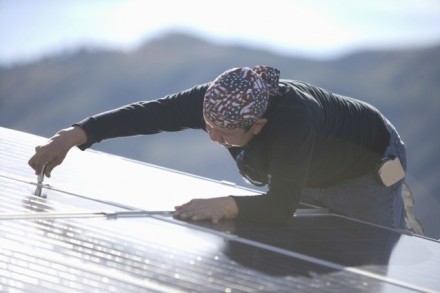 Despite Congressional refusal to extend tax benefits for clean energy producers, the American economy is still adding thousands of clean energy jobs — just way less than it did when those benefits were intact.

According to a report released Thursday by nonpartisan business group Environmental Entrepreneurs (E2), about 5,600 new clean energy and clean transportation jobs were announced throughout the country in the first three months of 2014, a huge decline from the 12,000 such jobs reported in the first quarter of 2013. Part of this decline is due to Congress’ failure to renew the Production Tax Credit (PTC) for wind energy, a $13 billion tax break to the wind industry to help them compete with fossil fuels.

“At the end of 2013, Congress let the PTC expire, halting the momentum of a rapidly growing industry,” the report, which tallies the amount of publicly available job announcements across the country, said. “As long as federal tax extenders remain in limbo, renewable technologies will remain stuck in a boom-bust cycle dictated by the whims of Washington.”

The PTC officially expired on January 1 of this year due to Congressional gridlock over the issue, driven by Republicans who oppose giving tax breaks to the wind industry on the grounds that it amounts to a form of “welfare” that unfairly props up an industry present in some states but not others. At the moment, it’s particularly hard for wind to compete with the oil and gas industries, which benefit from a wealth of federal tax carve-outs and a century of economic infrastructure, even though the economic activity they generate is concentrated in just a few key states.

It wasn’t the expiration of the tax credit that ultimately killed investment in wind energy, however. Instead, it was Congress’ repeated decision for the last two years to wait until the very last minute to make a decision on whether the extend the tax credit. That uncertainty was too much for investors, who mostly chose to invest elsewhere in the face of that uncertainty. According to the American Wind Energy Association, 30,000 jobs were lost in 2013 as a result of uncertainty over the extension of the PTC.

Still, the report said, jobs are being added in the clean energy sector — just not in wind. Indeed, the largest growth area in the first quarter was in solar power, with 1,400 jobs announced so far.

But the amount of solar jobs announced was still a significant decline from previous quarters, the report said — another result of uncertainty over federal policy. Like the wind PTC, the similar Investment Tax Credit for solar projects is set to expire in 2016, and it’s unclear whether the political environment will allow for it to be renewed. Because of this, large-scale projects that require long lead times are being reconsidered, the report said.

There is still hope, however, that clean energy and clean transportation job can come back on track, once the Obama administration unveils its long-awaited standards that will, for the first time ever, limit the amount of carbon pollution that can come from existing power plants. Those standards, set to be released in June, will “pave the way for manufacturing and power-generation companies in clean energy and energy efficiency sectors to invest in operations and add jobs,” the report said.

State officials can help revive the clean energy economy by defending Renewable Portfolio Standards, which mandate that states produce a certain amount of renewable energy from solar, wind, geothermal, and other sources. These standards are one of the main targets of the right-wing American Legislative Exchange Council (ALEC), an influential lobbying group composed of Republican politicians and big businesses, which has been pushing to repeal them in individual states throughout the country.

“If we want to keep creating good-paying clean energy jobs in America, our elected officials need to do their jobs first,” E2′s executive director Bob Keefe said in a statement. “They need to support these smart policies that will help our economy while also helping our environment.”