Taking issue with Joe Hockey’s claim wind energy is “utterly offensive” and a “blight on the landscape,” renewable energy supporters flooded the Sydney Morning Herald with letters defending the technology.

Australian National University academic Hugh Saddler penned a dispassionate analysis concluding that, despite the Treasurer’s hostility, wind energy will remain a growth sector in the ACT.

Rubbing insult to injury, a satirical Facebook page titled Things that are more offensive than wind turbines sprung up and rapidly gained over 7,700 supporters. 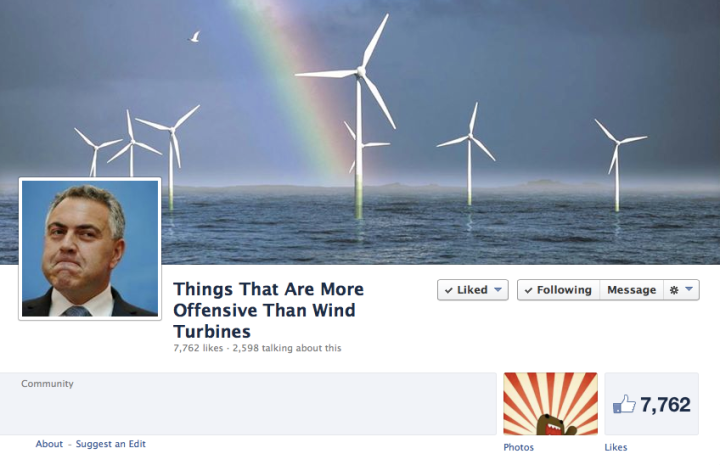 If there’s a bright side to the episode, it’s that it has drawn out another pro-wind energy MP within the Liberal party’s ranks: Andrew Laming, the Member for Bowman. Laming joins Warren Entsch as a wind energy supporter.

Andrew Laming’s level-headed support for wind energy in an interview with Fairfax shows more nous than the Treasurer.

When asked whether he agreed with Joe Hockey’s position that wind farms are “utterly offensive”, Laming responded with an unequivocal “not at all.” Laming, who describes his position on energy technology as “agnostic” went on to say:

“It’s all about place and negotiation with local land owners, and ultimately if wind proves to be the technology of the future, we’ve got to be somewhere in front of the pack doing it without being to exposed economically to poor decisions in renewable energy.”

New modeling by the ROAM Consulting, commissioned by the Clean Energy Council, shows dispensing with the Renewable Energy Target will cost: