Wind farms reduce green house gas emissions in the overall electrical grid on close to a 1:1 basis. Typical grids produce 800 g of CO2 equivalent (CO2e) per KWh generated by their mixes of fossil, nuclear and renewable generation, and wind energy displaces virtually all of that. It’s difficult to imagine the mindset in which one would assert that black is white and that wind energy actually increases greenhouse gas emissions or does not reduce them. Yet many anti-wind commentary continues to make this claim based on an overlapping and baseless set of myths.

It’s worth digging into the reality compared to the odd myths that are being spread, but before we get into the details, what does actual grid management data tell us? As the graph above shows, there is pretty much a one-for-one replacement of fossil fuel generation with wind energy, meaning that CO2e is also displaced on a one-for-one basis.

To summarize the reality of the situation:

And so, on to the underpinnings of each of the realities and their attendant myths.

Those opposed to wind turbines make a remarkable claim about this form of generation: that the energy and materials required to manufacture it, and the concrete required for the base during construction emit so much CO2 that wind turbines never pay the carbon debt back.

But what does a full lifecycle cost analysis of carbon from cradle-to-grave show?

Concrete use is factored into the full lifecycle cost analyses (LCA) comparing various forms of generation. Manufacturing LCAs follow ISO standards, must be published and must be subjected to external independent auditing. Every manufacturer of anything bigger than a breadbox follows the same standard, regardless of what form of generation they are building and maintaining. The best available meta-analyses of all forms of generations’ lifecycle costs of energy show that wind energy has a full-lifecycle, CO2e emission lower than any other form of generation, lower than nuclear, 1 / 50th of natural gas and 1 / 100th of coal.

Modern wind turbines are typically in the 2-3 MW range, with much larger ones offshore and larger ones often considered for most wind farms. Assuming 2.5 MW average for a modern wind turbine, this would require about 400 wind turbines to enable a gigawatt of generation capacity, resulting in about 2,400 homes equivalent, not 30,000 homes worth, as some have asserted. If you scaled up for apartments, townhomes and bungalows, you might get to 6,000 homes, but nowhere near 30,000.

So not only do wind turbines not use unusual amounts of concrete, it is included in the apples-to-apples comparisons that show that with the concrete bases, wind energy is still enormously better than fossil fuel generation alternatives.

2. Wind farms don’t require much backup and it exists already

People opposed to wind energy often claim that it requires 100% backup due to the variability of the wind, and further that this backup must be built just for this purpose and that it will often be coal generation, the dirtiest form of generation. This would be true if the following were true: wind was being expected to be the sole form of generation, the grid was small and isolated from other grids, no generation existed at all today and coal plants were actually useful as renewables backup. None of these things are actually true.

No one suggests that wind energy provide 100% of grid demand except as a thought exercise, but many agree that it makes sense in the range of 10-30% of grid demand for the majority of jurisdictions (outliers including Spain, Holland and one state in Australia).

Grid interconnectedness is one of the major themes of the late 19th and now 20th century. Buying and selling excess power across jurisdictional boundaries allows much more efficient use of generation assets, and jurisdictions such as Quebec invested in major hydro projects with the expectation of selling electricity to Ontario and the USA. Major transmission lines are being built in the USA to bring power from the plains to the coasts.

According to major grid management studies in the UK and Finland, renewables at penetrations of up to 20% of demand will require only 20% of their annual generation as backup. That backup will come from existing nearby jurisdictions, unused hydro and existing generation capacity that is no longer used full-time. Natural gas plants are typically used for peaking supply now, which is exactly the same usage model needed for renewables backup; they often have capacity factors of 10% already. This doesn’t change anything about the use of natural gas.

As demand in developed nations such as the USA and Canada is flat, not growing, wind energy and other renewables are being built as major fossil generation assets retire and are directly reducing capacity factors on existing fossil fuel generation plants. No new generation is required to provide backup, as that generation capacity already exists in often poorly utilized existing assets. As the grid decarbonizes, fossil backup will be supplanted by storage and overbuild of renewables, not lead to a new build of fossil fuel plants.

Coal plants will not be used for renewables backup because it takes hours to turn them up or down; that is why coal is used for base load power, not peak load power.

And, of course, grid management keeps hot standby generation available for the occasional eventuality that a major singular generation source such as a hydro dam or nuclear plant drops off the grid, for example due to transmission lines going down in storms.

So the backup myth is inaccurate and just gets more inaccurate the more it is embellished.

One of the attack points of those opposed to wind energy is that having hot standby backup lowers the efficiency of the fossil fuel plants required for that purpose. As the preceding section points out, backup requirements are minimal until very high penetrations and the backup already exists, but what about when wind and solar are much larger parts of the grid?

These are the results of the “high” penetration scenario of the Sept 2013 study from the US National Renewal Energy Lab where 16.5% each of wind and solar were providing total demand. Note that when 33% of energy is provided by renewables, total carbon savings would be from 29-34% of total grid emissions and other savings would be equally significant. Total fuel costs savings for supply would be $7 billion compared to less than $35 million for increased operating costs for fossil fuel generators (note the billions vs. millions difference there). This study was based on emissions data from almost every generation facility in the USA, and reviewed by over 50 grid management and energy experts from utilities, research institutes, universities, manufacturers and generation firms across the USA.

In the UK this is equally obvious from empirical data, as a direct quote from the head of Energy Strategy for UK’s National Grid shows:

Dismissing this as one of the “flakier arguments” in the renewables debate, Smith points to a recent analysis National Grid undertook for the Scottish Parliament. It concluded that over an 18 month period, the expected emissions benefit of using wind power – that is the amount of carbon dioxide saved by using wind to produce power – was reduced by just 0.1 per cent as a result of the need to use fossil fuel power stations as backup.

So wind energy requires a fraction of its capacity as backup and that backup won’t be creating nearly as much CO2e as critics claim.

Liming Zhou, associate professor at the State University of New York, Albany published a paper on April 29, 2012 in Nature Climate Change which found that ground temperatures directly beneath three wind farms in Texas were an average of 0.72 degrees warmer at night. This was seized upon by news outlets such as the UK Telegraph and Fox News that often dispute the science of global warming as evidence that wind farms actually cause global warming.

The diagram below is from his paper showing an enhanced view of this increase in ground temperature. 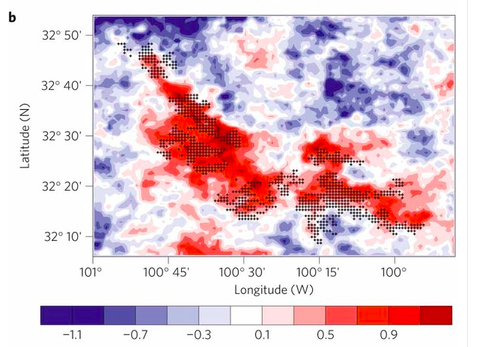 Now the hype, in which Mr. Zhou appeared fully complicit although he subsequently recanted.

To his credit, at no time did Mr. Zhou say wind turbines would have a larger climatic impact. This was left to Fox News and various other news sources that should have known better, but couldn’t resist the headline.

This has become fodder for a long-running myth despite coherent rebuttals by the NRDC, NPR and NASA.

Once again, when the roots of myths related to wind turbines not being a key wedge in the fight against global warming are assessed, they are found to be without merit.

A variety of related myths float around wind energy as well, suggesting that CO2 emissions are just the tip of the iceberg in terms of environmental harm. However, full lifecycle analysis shows that this just isn’t the case. GE, like every other manufacturer, must abide by ISO standards when performing LCAs, and furthermore, manufacturers every single form of electricity generation technology, including wind energy, solar, nuclear, coal and gas plants. The standards also require that the LCAs be published, and every manufactured wind turbine has a published LCA. This example from GE shows the typical full-lifecycle accounting results for all aspects of a modern 2 MW wind turbine. Note that it shows 146 days for payback of energy. 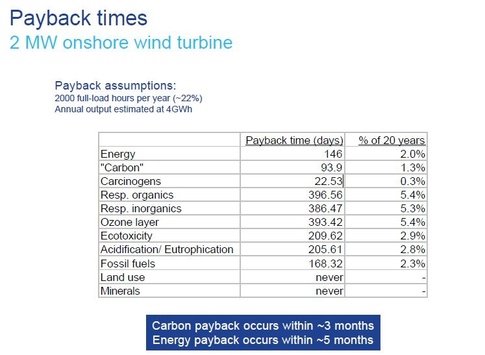 In this comparison, you’ll see that the two generation technologies with the highest energy payback ratio are wind and wind with pumped-hydro storage.  A high ratio is good in this case. 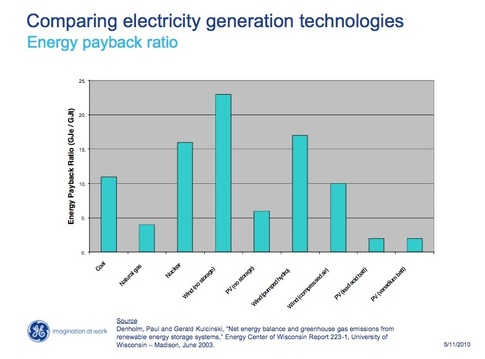 This is just one of the examples of cross-generational comparison that finds wind energy to be about the most benign form of utility-scale generation that has been created by mankind.

Wind farms are one of the key wedges in the fight against global warming. The myth that they aren’t is a multi-headed hydra. As can be seen, each head of the hydra is as mythical as the last. It is kept alive only on anti-wind disinformation sites and by global warming denial journalists.