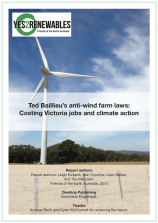 “The State Government’s anti-wind farm laws prohibited our project without any consultation or justification,” said Barry Mann of the Macedon Ranges Sustainability Group —the organisation behind the community wind farm proposal. “We’d love to follow in the footsteps of Hepburn Wind and build a community wind farm in Woodend.”

The Friends of the Earth research prompted responses from the major party candidates.

Labor candidate for Macedon, Mary-Anne Thomas, reiterated the party’s commitment to “rip up” the government’s anti-wind farm laws that have robbed the region of jobs and investment. Ms Thomas offered the following critique of the Coalition planning laws:

“Firstly, it has no regard for the wishes and aspirations of local communities.

“Secondly, it is a policy that has cost jobs and investment at a time when Victoria’s unemployment rate is at a 10-year high.

“And finally, it represents a lost opportunity to protect our environment by supporting and investing in renewable energy.”

Liberal candidate Donna Petrovich made a weak defence of the anti-wind farm laws. Ms Petrovich ignored the adverse impact on jobs, investment, and drought-proof income for farmers to claim the laws protect the landscape character of the region.

One only has to look at the arbitrariness of the “no-go zone” to see the argument doesn’t stack up. Additionally, it is disingenuous to refer to places such as Hanging Rock when there are no wind farms proposed nearby.

Petrovich also claimed communities did not have a say under the previous planning framework. It was this remark that prompted Lyn Hovey of the Riddells Creek Sustainability Group to pen letter to the Macedon Ranges Guardian. Hovey sees wind energy as an opportunity for the region to address climate change and disputes Petrovich’s account of community engagement:

I wish to take issue with Donna Petrovich’s claim that the council and community were not consulted about the use of wind energy in the Macedon Ranges under the state Labor government.

The proposed community controlled wind farm at Woodend was canvassed widely in the press by Macedon Ranges Sustainability Group, in public forums and its development had the interest of the Macedon Ranges Shire Council. It was to be sited in a pine forest near Woodend, hardly iconic landscape.

Polls taken have consistently shown that wind energy is favourable to a majority of people. Communities don’t have a say now that the Liberal government has imposed a blanket ban on wind turbines in the Macedon Ranges. Their policy has led to a loss of jobs and a loss of pride that we in the Macedon Ranges can power our own homes from a clean, renewable source that we built because we need to ameliorate the effects of burning carbon fuels.

If Donna Petrovich is so enamoured by the coal industry, she should take an extended holiday to Morwell.

Friends of the Earth and voters who support more renewable energy for our state will be paying close attention to energy policy in the lead up to the state election. We’ll keep you informed about developments over the coming months.