Victoria is at risk of losing solar jobs if the Abbott government cuts the Renewable Energy Target following a review of the policy.

A national survey undertaken by the Australian Solar Council found 81 per cent of its member businesses would be forced to sack staff if the Renewable Energy Target is wound back or axed.

On the other hand, if the Abbott government leaves the popular policy alone, 60 per cent of the solar companies surveyed would hire more staff.

Analysis conducted by the REC Agents Association (RAA) found 12,600 solar jobs could go over the next four years if the Renewable Energy Target was axed. 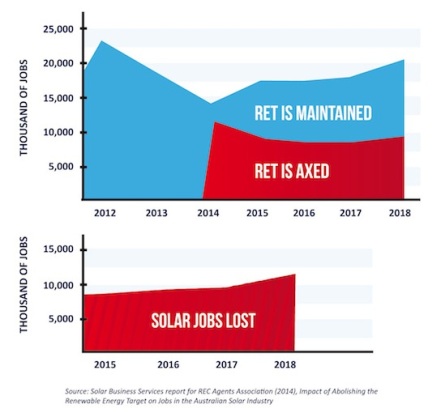 Solar energy has boomed in Victoria. The technology has had strong uptake in both metropolitan and regional areas. Regional Victoria has proportionally more solar installed than metropolitan areas. Victoria’s top ten solar postcodes are:

The growth of solar energy is creating jobs and delivering cheaper power bills while helping us address climate change. These benefits are at risk from the Abbott government’s RET review.

The Abbott government’s announced the review panel and terms of reference on February 17. It appointed known climate change denier Dick Warburton to head the review as well as panel members with a history in the fossil fuel sector.

There is no representation from the solar or wind energy sectors on the review.

The Abbott government’s choice of review panelists shows once again that this government puts ideology ahead of good policy and jobs.

The Abbott government would be wise to consider the views of Australians in their response to the review.

And what do Australians think about renewables and the RET?…

Polling commissioned by The Climate Institute shows solar and wind energy are the most preferred energy sources. 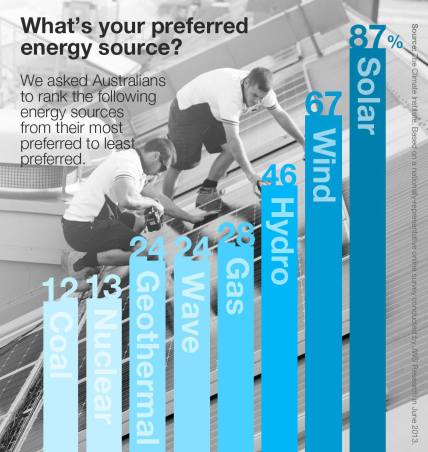 In terms of the Renewable Energy Target, polls show shows 73 per cent of Australians think the target is ‘about right’ or ‘not high enough’.

Will the Prime Minister deliver the energy future Australians want?… Time will tell.