The University of Melbourne partnered with the Grattan Institute for a public lecture on advanced materials and the ‘terawatt challenge‘ that faces the globe.

A presentation by Dr Eric Isaacs, Director of the Argonne National Laboratory, and panel discussion featuring deputy leader of the Australian Greens, explored the role of government to drive innovation and speed up decarbonisation of the economy.

Yes 2 Renewables attended the event and had the opportunity to ask Adam Bandt (Member for Melbourne) the following question:

The Abbott government has flagged it will allow a staunch opponent of renewable energy, Alan Moran of the radical Institute of Public Affairs, to be involved with the Renewable Energy Target review. It has backed yet another inquiry into the alleged health impacts of wind farms. What decarbonisation policies could feasibly win the support of the Abbott government? 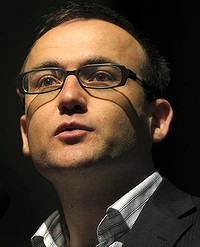 It’s a good question. Two years ago I spent a week in the north of Germany looking at their energy transformation. There are some places where you can’t move between towns—when you get on the train—where it’s just wind farms all the way.

We spoke to a number of farmers there. People laughed at us when we talked about the idea of negative health affects from wind turbines.

In fact, some farmers—who would never vote greens in their life, who where conservative through and through—where defending their right to have a wind turbine on their land.

We asked why and they said “in Germany we’ve got a saying: your own pigs don’t stink.” “Here we are producing this renewable energy. We’ve taken our town and our farm off the grid and it’s fantastic. It’s generating income for us and it’s the best thing we’ve ever had.”

I think there’s the prospect for that [in Australia] but it’s tough because the [Abbott government’s] ‘direct action’ policy at the moment is an announcement waiting for policy detail. No one knows actually what it is. So I can’t even answer what their renewable energy policy is.

The next six months to year is going to be very interesting politically. It’s one thing to be in opposition and tear down a government. It’s another thing to then say “here’s what we’re going to do to address climate change.”

Over the next year you’re going to see a lot of people asking that question. A lot of people saying “what are you in fact going to do?” I think it will be exposed to be a bit hollow.

I don’t know the answer to [to the question], but this is the year that we fight about it.