An occasional complaint against wind turbines is that they don’t work or self-destruct when there is too much wind. It might be scraping the bottom of the oil barrel, but it’s worth debunking this as well. What does the history of wind energy really show? 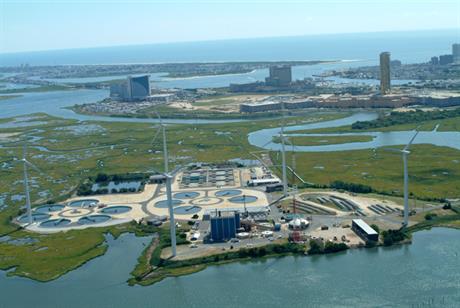 Well, the best evidence is from Superstorm Sandy:

On the afternoon of October 28, the Jersey Atlantic Wind Project stood right in Sandy’s projected path, and authorities at Infigen, which operates the five turbines just outside Atlantic City, weren’t quite sure what to expect. No other U.S. wind turbine project has taken a direct hit from a tropical storm of Sandy’s strength.

But the operators punched a few keystrokes on their computers, put the turbines into “hurricane mode,” and hoped for the best. They got it. Sandy’s wind speeds dropped below hurricane status just before landfall, but the Infigen turbines still withstood sustained winds of 65 mph [105 kph] or so, with gusts reaching much higher, as the center of Sandy passed right over them. The turbines were undamaged, said Matthew McGowan of Infigen, and were soon generating 1.5 megawatts of electricity again.

That’s right, wind turbines have a hurricane mode, designed to let them ride out major wind storms without damage. Basically, the blades get pitched to neutral so that wind forces them to not rotate, then they are locked down facing into the wind. A bit of shaking, but no harm.

But Sandy had lost strength by the time she got to New York you say? So what about wind farms in Cuba?

Before Hurricane Sandy hit the East Coast of the US, she actually hit the Caribbean first. Two of the hardest hit islands were Haiti and Cuba. Thousands of houses were destroyed in the Eastern part of Cuba around Santiago de Cuba, the country’s second largest city, and power supplies in the area were and still are affected by the hurricane.

However, in the province of Holguín, there were two wind farms installed in 2008 and 2010 one with six 850 kW turbines and the other with six 750 kW machines. Both of those wind farms were hit by hurricane Sandy with wind speeds of up to 110 miles per hour [177 kph] and neither of them had any major damage and continued to provide electricity for the local grid.

Wind turbines aren’t perfect. Perhaps one of the most widely shared pictures in December of 2011 and early 2012 was this one from the Ardrossan wind farm in Scotland during a wind storm where the wind velocity reached 161 mph (260 kph). One of the thirteen wind turbines had a problem with its hurricane mode and failed spectacularly. The rest were online shortly after the wind died, unlike the Hunterston Nuclear Reactor, which was offline for 54 hours after power lines to it blew down, leaving thousands of Scots freezing in the dark.

A Chinese wind farm didn’t fare as well, losing 70% of its 25 wind turbines between two typhoons. However, reading between the lines, there’s a strong chance that this was an improperly planned and built wind farm, possibly without alert technicians putting the devices into the right modes, or shoddy foundations.
Typhoon Usagi’s message for Hong Kong’s wind farms

Of course, wind turbine manufacturers are bulking up their wind turbines for use in areas where hurricanes prevail, just as they slimmed them down for areas with lower breezes so that they could generate better there.  This isn’t rocket science, it’s engineering. And in reality, there’s a cost benefit tradeoff being calculated by actuaries and CFOs: which is cheaper, insurance and replacement, or better engineering? There’s a negotiated compromise occurring around wind farms proposed for the paths of hurricanes today. 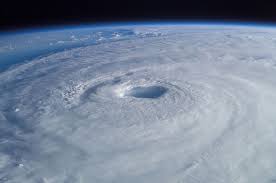 So what about Category 5 hurricanes and typhoons? Well, the category is preserved for ones with winds in excess of 155 mph (250 kph). As can be seen from the Ardrossan experience, wind turbines are already surviving those levels of winds onshore handily. There are lots of offshore wind turbines in the North Sea that experience the nasty weather that area throws up, and manufacturers are designing and building for survivability in hurricane winds. I’d bet on the wind industry on this one.
Hurricane Categories

As an amusing side note, Google’s Makani airborne wind guys assert that their system will be somehow better in hurricane force winds, but analysis shows that this is deeply unlikely as they will be deploying a weakly tied down 65 meter carbon fibre wing in a metal cradle that will be being pounded by storm surges as opposed to solidly connected feathered blades locked in place into the wind. It’s likely that they will have serious engineering problems to build the same survivability that current wind turbine technology has today. And they’ll produce less electricity for more money for the same scale wind farm, but who’s counting?