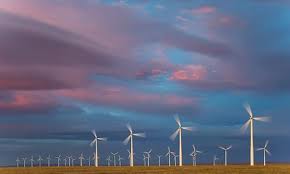 The decision by Warren Buffett’s utility company to order about $1 billion of wind turbines for projects in Iowa shows how a drop in equipment costs is making renewable energy more competitive with power from fossil fuels.

Turbine prices have fallen 26 percent worldwide since the first half of 2009, bringing wind power within 5.5 percent of the cost of electricity from coal, according to data compiled by Bloomberg. MidAmericanEnergy Holdings Co., a unit of Buffett’s Berkshire Hathaway Inc., yesterday announced an order for 1,050 megawatts of Siemens AG wind turbines in the industry’s largest order to date for land-based gear.

Wind is the cheapest source of power in Iowa, and the deal indicates that turbines are becoming profitable without subsidies, according to Tom Kiernan, chief executive officer of the American WindEnergy Association trade group. That’s a boost for suppliers including Siemens, General Electric Co. and Vestas Wind Systems A/S, and a threat to coal miners such as Peabody Energy Corp.

“If Congress were to remove all the subsidies from every energy source, the wind industry can compete on its own,” Kiernan said at a press conference at a Siemens factory in Fort Madison, Iowa, yesterday, when the order was announced.

Other wind-turbine companies are recovering from slumps. The market value of Vestas, Europe’s biggest turbine supplier, increased 86 percent in the second half through yesterday and it’s expected to report net income in the current quarter for the first time since since mid-2011.

Growing demand for wind power will offset waning use of fossil fuels, said MidAmerican Energy CEO Bill Fehrman. This order for 448 turbines follows a December 2010 agreement to use 258 Siemens turbines for other projects in Iowa.

Wind farms provide “a hedge for our customers going forward in an era of reduced coal generation,” he said at the event. The projects will qualify for the federal production tax credit for wind power, which is set to expire at the end of the year.

One of the five Iowa wind farms, the 44-megawatt Vienna II project, is already in operation. The company expects another 506 megawatts of turbines to begin producing power next year and the rest will go online in 2015, Fehrman said.

The company is investing a total of $1.9 billion in the five projects. Broadwind Energy Inc. will supply the towers.

MidAmerican expects to close some coal-powered plants in 2015 as the price of wind power continues to slide, said Adam Wright, vice president of wind generation and development for MidAmerican’s Iowa utility.

“Those coal retirements do require us to have some excess capacity or an increase in capacity,” he said yesterday in an interview. “If you strip away everything from all generation resources, I think wind is more competitive.”

Wind turbines typically cost about $1 million for each megawatt of capacity, making the deal worth more than $1 billion for Siemens, Markus Tacke, chief executive officer of the company’s wind power division, said without providing an exact price.

“Most people expect gas to become more expensive,”she said in an interview. “I think in most windy areas in the U.S it will be competitive by 2020.”

The industry is expected to install about 32 gigawatts of new wind capacity worldwide this year, down 28 percent from last year, according to New Energy Finance, in part because of low demand in the U.S. in the first half after the production tax credit lapsed. It was renewed at the start of 2013. Demand next year will rebound to about 43.7 gigawatts.

Power from coal costs about $78.30 a megawatt-hour to produce and gas costs $69.71, compared with $82.61 for onshore wind farms, according to data compiled by Bloomberg.

The cost and reliability of coal will ensure that it remains part of the energy mix, Vic Svec, head of investor relations for St. Louis-based Peabody Energy, the biggest U.S. coal producer, said in an e-mailed statement.

Siemens will supply hubs and nacelles, the car-sized units that house the gears, electronics and gearboxes for turbines, from its plant in Hutchinson, Kansas, and rotors and blades from the Fort Madison facility.

Siemens has also agreed to supply turbines for Cape Wind, the proposed offshore wind farm off the coast of Massachusetts that faced opposition from local residents including the Kennedy family. The company said the project will qualify for a key federal credit, the investment tax credit, which is also set to expire Dec. 31.