One thing to admire about those who dislike wind energy is their sheer persistence. If one argument gets stamped out, they turn to another without blinking an eye. Specific pieces of disinformation ebb and flow as the evidence mounts.

One of the recurring minor points of anti-wind rhetoric is that wind farms commonly feature amplitude modulation which increases the intensity of the noise and the annoyance factor of the noise. So what’s the reality?

First, what does amplitude modulation even mean? Well, it’s just one of the two ways in which wave forms change. A standard wave is regular, with peaks the same distance apart (frequency) and the same height (amplitude). If you change the height of the peak, that is modulating the amplitude. And if you change the distance between the peaks, that’s frequency modulation. That’s all that AM and FM on radios mean at heart, that they are changing the amplitude or the frequency of the radio waves to encode information.

Thinking about it for a second will tell you that wind turbine noise features amplitude modulation as a primary characteristic. The quiet swoosh of a blade passing the mast is a result of amplitude modulation. It’s a little louder at that point in its rotation. When an anti-wind campaigner complains about amplitude modulation, they are being fairly generic, and that’s likely not the condition that they are complaining about. Typically, this is referred to in the literature as Normal Amplitude Modulation. It’s most obvious to people to the sides of the wind turbine rather than upwind or downwind.

There is another form of amplitude modulation that’s been relatively poorly explained. A small subset of wind farms occasionally experience a sound more like a thump than like a swoosh. Historically, records in the UK where this condition was most commonly complained about found that four of 133 wind farms occasionally experienced this condition, and that the noise itself wasn’t louder, it just had different characteristics that made it slightly more noticeable to some people. Literature refers to it as Other Amplitude Modulation or Enhanced Amplitude Modulation, which is only slightly less generic than amplitude modulation. It’s a bit lower in frequency and is typically only significant in impact downwind of the turbine, which is important has general turbine noise is greatest downwind. And not all downwind sites receive the noise in the same way, with significant variance even for the same site under superficially similar conditions.

It’s become such a recurrent feature in complaints, however, that further study was required. People put forward papers at conferences claiming it was a common feature. They advanced all sorts of theories. They claimed that it was much louder.

Well, by far the most comprehensive study was published in December 2013 by RenewableUK. They funded Hoare Lea Acoustics, an independent and accredited organization of long standing with 27 acousticians across 13 offices, to assess the historical studies, assess the historical acoustics records, perform acoustical modelling, perform additional acoustic testing and provide an analysis and synthesis of the results. This was broken down into seven work packages:

They strove to determine the causes and impacts of Other Amplitude Modulation through this rigorous approach, and were partially successful.  It’s worth quoting extensively from their summary:

The team was able to determine what was causing the noise characteristics: loss of laminar flow of air over the blade, otherwise known as stalling. This was found to occur in a variety of conditions including wind shear at the top of the blade rotation causing differential wind speeds, and upwind obstructions causing significant turbulence. 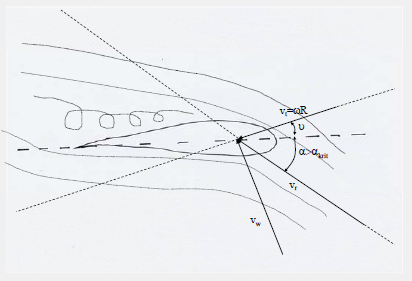 This is a diagrammatic view of turbine blade stall, with delaminating eddies above the blade. This is understood to be the source of the ‘thump’ of Other Amplitude Modulation.

As is pointed out, this stalling of the blade at one point in the rotation, typically at the top, did not continually occur, but sometimes only lasted for a few rotations.

So, there’s a fairly solid understanding of the cause and some of the conditions under which it can occur. Can something be done about it? Here again it’s worth quoting directly:

the process of trying to directly rate modulation amplitude in this manner proves to be too arbitrary, as picking peaks and troughs from all of those present is open to a degree of interpretation which is potentially too large, and too readily influenced by spurious noises, such as bird noise, to make the method sufficiently robust in terms of its objectivity and/or repeatability.

the project has concluded that an efficient and repeatable objective method for the discrimination and quantification of OAM can be developed.

It should be borne in mind that field measurements have established that for real data, the difference between LAeq and LA90 remains close to 2dB(A) even for periods of sustained modulation.

This states that the noise variance when this occurs is small. In the real world, it is detectable, but it’s not a big variance in noise.

The modulation depth was found to increase the annoyance rating slightly, but consistently; however it should be noted that the effect was not statistically significant because there was a large spread of ratings. This is consistent with previous results in comparable studies. A clear (significant) onset of annoyance at a particular modulation depth could therefore not be determined.

This statement points out that amplitude modulation studies have found that it just isn’t that big a factor in people getting annoyed.

Outside of the field of wind energy, it’s quite possible that this effort would have been abandoned years ago. Inside the world of wind energy however, chasing vanishingly small impacts down rabbit holes and finding mitigations for them is par for the course.

Even this tiny impact is likely fixable through software control of the pitch of the wind turbines in specific conditions, but it would require a fair amount of effort across manufacturers.  It’s hard to determine if that’s worthwhile.

It is believed that with such cooperation, methods will be capable of being developed for avoiding local stall conditions. Such methods may involve software „fixes‟ that seek to modify the logic of the control system algorithms, perhaps even through the application of more advanced cyclical pitch control. More fundamental, physical design changes may also prove worthwhile, such as innovative blade designs or the addition of blade vortex generators, for example, as the latter may delay the onset of stall. Such mitigation would be likely to only have a limited or negligible impact on the generating capacity of the turbines.

So, Other Amplitude Modulation occurs on perhaps 3% of wind farms, it occurs only occasionally, it usually only occurs for brief periods of time, is mostly only audible to people downwind of the wind turbines and studies show that most people don’t find it annoying. Now there’s a problem worth spending millions to fix.

If an anti-wind campaigner says that wind farms are uniquely annoying due to the devastating impacts of Amplitude Modulation, you can safely ignore them.

Since posting this, a US anti-wind campaigner has pointed out a couple of reports he claims counter this analysis. It’s worth looking at them of course.

The paper goes on to mix sound propagation under different meteorological conditions into the mix, instead of focusing on the question of amplitude modulation. This confuses the issue considerably as it’s not possible to separate the two concerns out.

The paper appears to be vigorously attacking a position that no one actually holds. Everyone agrees that normal amplitude modulation exists in every wind farm as a characteristic of blades passing the mast, creating the swoosh, and that wind turbine noise is slightly more annoying due to the variance.  As study after study has shown, at normal setbacks annoyance due to wind turbine noise is much more strongly correlated to factors such as dislike of wind turbines, lack of revenue from nearby wind turbines, negatively orientated personality traits and presence of anti-wind campaigns.

With luck, the poor use of terminology and confusion of concerns will be addressed during peer-review before publication so that clarity can be achieved in the actual results. At present, this paper is just adding smoke not clearing the air.

The second reference the anti-wind campaigner brought to my attention is actually only an article in WindPower Monthly:

The study itself is not linked and does not appear to be available online yet. This article refers to work done assessing the degree of noise annoyance from wind turbines, and once again does not differentiate the swoosh from the thump. It appears to indicate that the characteristics of variable noise are slightly more annoying than steady noise, which is a known element of wind turbine noise. Asserting that it’s somehow contrary evidence to the low occurrence of the UK thumping concern is fairly inane.