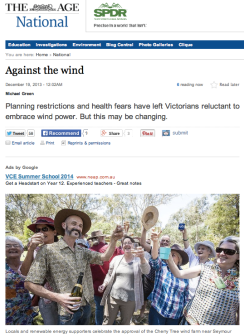 The contrast between the Cherry Tree Range and Coonooer Bridge wind farms detailed in The Age’s  ‘Against the Wind’  feature article is telling.

It shows us that when the anti-wind campaign comes to town, there’s fear and division. And when they don’t, there’s civil deliberation of wind farm proposals and acceptance of planning decisions.

The Waubra Foundation and Landscape Guardians dominated the VCAT hearings on the Cherry Tree Range wind farm. While Mitchell Shire representatives stated at the outset that they did not reject the wind farm on health grounds, it was health arguments that dragged out the proceedings.

A Freedom of Information request made by Friends of the Earth discovered the VCAT hearing cost the Mitchell Shire at least $165,000. Ratepayers are the collateral damage in an ideological fight against clean and safe wind energy.

BEAM stood up for a wind farm in their region. Sign the petition to stand with them!