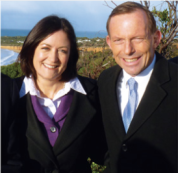 In the dying days of the 2013 federal election, wind energy emerges as an issue for voters in Corangamite.

At the time, Liberal candidate and now elected member of parliament Sarah Henderson proclaimed her support for Ted Baillieu’s unpopular anti-wind farm laws in a town hall meeting in Torquay. Henderson’s endorsement of planning laws which have cost the state millions in investment, hundreds of jobs and crucial renewable energy capacity, was an uncharacteristic gaffe.

Victoria’s significant carbon emissions could be reduced with wind farms, yet the Napthine government’s wind farm ban is holding Victoria back from benefitting from this sensible and clean way of producing electricity.

I was shocked to find out that the new member for Corangamite Sarah Henderson endorsed Victoria’s anti-wind farm laws at a public meeting in Torquay prior to the election.

The government in Victoria seems to think it’s okay to locate a polluting coal seam gas well just 100 metres from a home, whereas they currently mandate that clean and safe wind turbines have a two kilometre setback from homes.

This double standard is unacceptable.  I urge Sarah Henderson to join her constituency and adopt a much more constructive position on wind farms.

This is about plain common sense and simple maths. Wind turbines are helping rural properties, businesses, and community projects reduce energy costs and their carbon footprint.

On top of all this, there are moral aspects. If we care about our children, we must get off our fossil fuel addiction.