While the latest IPCC report was released, the conversation around climate science has been burdened by passionate ‘climate skeptics’ and wind farm opponents. In the face of a ‘peer-reviewed’ scientific report, skeptics still continue to pick and choose evidence to flatter their worldview.

The following article by Ketan Joshi, Research and Communications Officer at Infigen Energy, explores this terrain. These views are his own. The original article can be found here.

Last Friday, the IPCC report on climate change was released. George Monbiot of The Guardian describes it neatly:

“It’s perhaps the biggest and most rigorous process of peer review conducted in any scientific field, at any point in human history.”

For a good summary of the report, try Graham Readfearn’s article, ‘IPCC climate change report by numbers‘, or The Guardian’s interactive infographic.

Essentially, if we keep injecting greenhouse gases into the atmosphere, the Earth will continue to warm – the Earth being our domicile, that small rock, covered by a thin film of liquid and gases, hurtling through space, the surface of which we should really, really shouldn’t screw up.

Typically, we listen to experts, particularly when they’re telling us about imminent danger. Yet, climate scientists have been burdened with an effective, angry and motivated crowd of climate ‘skeptics’ – fueled by talented pseudoscience communicators like Joanne Nova and Andrew Bolt. They derail the public confidence in the science of climate change by convincing people to demand ‘evidence’ that climate change is real. Tory Shepherd of the Adelaide Advertister describes the phenomenon well, in her Radio National piece, relating to anti-flouridians:

An excerpt from Nova’s ‘Skeptics Handbook’ – a handy PDF guide to haranguing ‘warmists‘:

The concept that actual scientists should be the ones engaging in scientific discussions is classified by Nova as the sacred ramblings of ‘religious dogmatists’. Nova masks her arrogant dismissal of scientific expertise as an ‘appeal to authority’. Quickly, the discourse around climate data shifts from those with the necessary expertise to understand and interpret the science of climate change to a large number of non-experts. Climate ‘skeptics’ have kept this force constant, and it’s easy to see it happening on social media, like Twitter.

The logical fallacy of equating expert consensus with a deference to ‘authority’ is frequently and unashamedly deployed by climate change ‘skeptics’, and they’re rarely called out on this sly maneuver. They assert that a large number of experts (including quite a few Australian scientists) have failed miserably, and that they themselves, (non-experts, but untainted by the ‘green agenda’), have reached the true truth, via their unflinching dedication to the evidence.

It’s fairly obvious that their demands for evidence are tactical, rather than sincere. That it’s literally listed in a ‘handbook’, described as a set of ‘strategies and tools’ should make this pretty clear. But it always hits home when I see climate ‘skeptics’ attempting to engage with the issue of ‘wind turbine syndrome’ – a brilliant example of a phenomenon that is assumed to be true by opponents of wind farms and climate ‘skeptics’ alike, despite there being a complete lack of evidence for its existence. The ‘Galileo Movement’, one of Australia’s key climate ‘skeptic’ groups, makes this pretty clear on their Twitter feed: 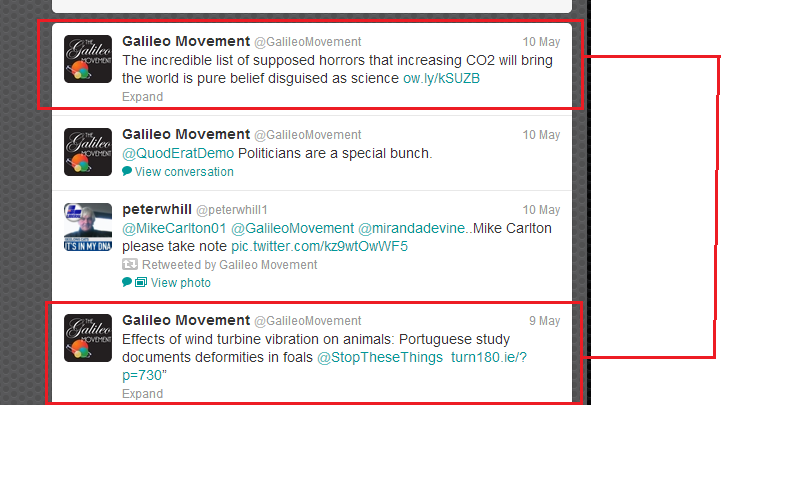 Climate ‘skeptic’ site ‘Watts Up With That’ featured a post on the Portuguese study mentioned by the Galileo Movement. This study reportedly shows that wind turbine vibrations cause deformities in foals. How do we know the wind turbines are responsible? The author of the post, Ric Werne, explains the science:

“The wind turbines are obvious prime suspect, they were built nearby”

Obviously. The problems with the study are outlined on this forum, and quite a few of the commenters on the original post, to their credit, took issue with Werne’s adoption of the cause.

The difference between attitudes to the science of climate change, and the pseudoscience of ‘wind turbine syndrome’, are telling. The scripted demands for evidence simmer to the background, when a potential shortcoming of renewable energy peeks alluringly over the horizon.

James Delingpole, one of Britain’s most prominent climate change ‘skeptics’, bears no shame in compartmentalising his approach to the two issues:

Selective skepticism isn’t limited to climate change ‘skeptics’ – it happens on both sides of politics, and isn’t a function of your level of education. As described by social scientist and lawyer Don Braman, part of the Cultural Cognition project at Yale:

Most importantly, it’s a reminder that the public debate about climate change ought to be considered for what it is: fatally compromised by rarely-acknowledged flaws in our cognition. What we ought to turn to is the discussion conducted by experts, in fields that are embedded with controls (like, peer-review) designed to correct for the flaws that ubiquitously infest the public discussion.

It’s called science, and if we care anything for the acceptance of evidence and the rejection of arrogance, then we’d do well to pay close attention to the content of the IPCC’s latest report.