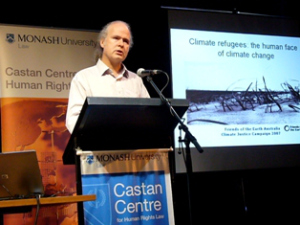 Friends of the Earth campaigns coordinator and prominent Australian environmentalist, Cam Walker, says it’s time for the Napthine government to follow the lead of their counterparts in NSW:

Tony Abbott has wasted no time in cutting into climate change programs, including reaffirming earlier commitments to kill off the Clean Energy Finance Corporation, which supports the development of renewable energy projects.

This makes the Victorian government’s anti-wind energy stance even more worrying. The creation of arbitrary ‘no go’ zones across much of the state has effectively stopped new wind projects being brought forward. South Australia has been the main beneficiary of this policy, with wind investment moving west.

In contrast to the ‘closed for business’ approach of Victoria, the NSW government has just released its Renewable Energy Action Plan, which aims to guide NSW’s renewable energy development and support the national target of 20% renewable energy by 2020. The Plan positions NSW to increase energy from renewable sources at least cost to the energy customer and with maximum benefits to NSW.

Unlike Victoria, where the state government has walked away from any meaningful action to reduce greenhouse emissions, the NSW strategy aims to work closely with regional communities and the renewable energy industry to increase renewable energy generation in that state.

NSW shows what is possible under a Coalition government. Sadly, Victoria remains in thrall to an ideological opposition to wind energy that it inherited from Ted Baillieu.