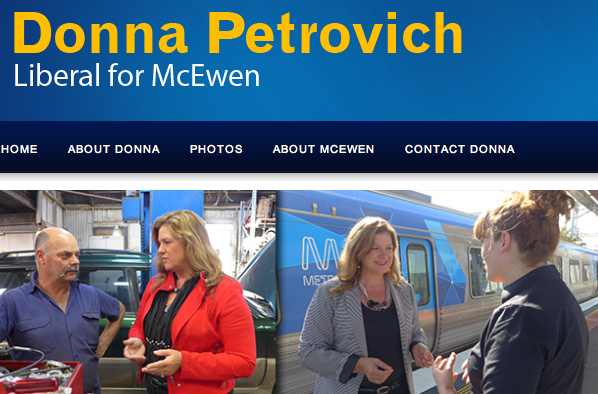 Over the last few weeks, Yes 2 Renewables has brought attention to several Liberal candidates who are staunch opponents of wind farms.

In the final days of the campaign, we’d like to highlight the Liberal candidate for the marginal Victorian seat of McEwen, Donna Petrovich.

Former state MP Donna Petrovich has railed against wind farms during her time in the state parliament while trumpeting the benefits of polluting fossil fuels. Petrovich is “proud of” the stringent wind farm planning laws introduced by the Baillieu government.

In the electorate of McEwen, the anti-wind farm laws Petrovich endorses has stalled the Cherry Tree Range wind farm proposal. The local wind farm project will:

Petrovich’s opposition to wind energy runs deep.  She is on the record as working with radical anti-wind farm groups.

“I have worked with groups such as the RATs (Residents Against Turbines) of Tooborac and a group that works out of Baynton and Sidonia, and they have had great concerns about the proposals for wind farms.”

Ms Petrovich has also thrown her weight behind unsubstantiated claims that wind farms cause health problems:

“There are health concerns with these turbines, and I think the jury is still out in many cases regarding the health implications of turbines.”

When it comes to fossil fuels such as brown coal and coal seam gas Ms Petrovich has no such concerns–for human health or climate change impact:

“The Coalition looks towards the effectiveness and abundance of brown coal as a means to provide a reliable source of energy for Victorians.”

“I can say from the outset that we will not be supporting any moratorium on exploration for coal seam gas.”

Petrovich’s contrasting positions on clean wind energy and polluting coal seam gas will concern many in her electorate.

Already, the peak environment organisation in McEwen, BEAM-Mitchell Environment Group, have expressed concern about the Liberal candidate. BEAM have criticised Ms Petrovich for her silence on the important issues of climate change and renewable energy throughout her campaign.

Given that all of the available public polling shows that three quarters of the community support more wind farms, even among Coalition voters, Friends of the Earth encourage Donna Petrovich to adopt a stance on wind farms that aligns with mainstream views. It’s time for political leadership on wind energy, not pandering to fringe anti-wind campaign groups.