A local environment group in the marginal Federal seat of McEwen have expressed concerns about the Liberal candidate, Donna Petrovich. 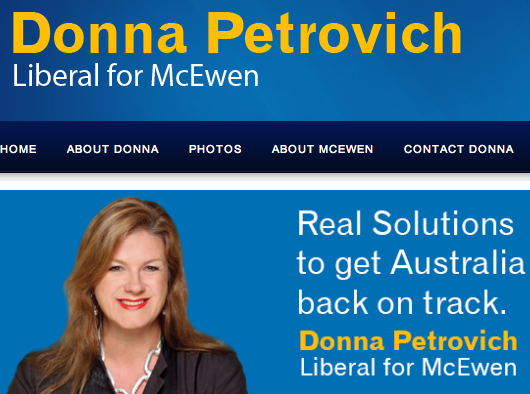 BEAM-Mitchell Environment Group, who have supported the nearby Cherry Tree Range wind farm proposal, are concerned by Petrovich’s track record of supporting polluting fossil fuels and opposing to clean and safe wind power while serving as a member of the Victorian parliament.

In a statement, BEAM President Richard Telford had the following to say about the Liberal candidate for McEwen:

BEAM made several attempts to engage directly with Mrs Petrovich last year regarding her position on wind energy production in our region, she appeared reluctant to explain. Her office provided BEAM with a past press release from March 2012 in which Mrs Petrovich professes a passion for ‘nurturing alternative and sustainable energy industries’, yet then goes on to describe how she fully supports the restrictive planning policies of the Liberal government in Victoria. These are the same policies that have brought  the wind energy industry almost to a halt right across the state, and that have impacted locally on the Cherry Tree Ranges project.

BEAM has submitted a series of environmental questions to all candidates in the seat of McEwen, the answers will be posted on our website by the 1st of September and should be of interest to voters right across the electorate. While Mrs Petrovich has so far been reluctant to expose her current position, BEAM looks forward to the Candidate’s Forum in Seymour on Wednesday, where Donna Petrovich will have the opportunity to reveal what she really stands for.

Yes 2 Renewables has been informed that Ms Petrovich will not appear at a community-organised candidates forum in Seymour tonight. Perhaps Petrovich is concerned that her support for fossil fuels and laws that ban wind farms in the windiest parts of the state will be out-of-step with the views of McEwen voters.

One thought on “McEwen environment group: Where does Donna Petrovich stand on wind energy?”