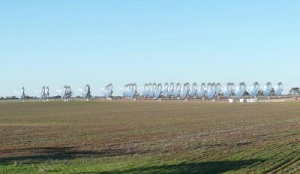 Thursday saw the official launch of the Silex built Concentrating Photovoltaic (CPV) Solar Power Station in Mildura, Victoria, supplying enough power to the grid for about 500 average homes. Victorian Minister for Energy launched the power station, but was criticised by Environment Victoria for failing to support investment in solar energy as promised in their 2010 election commitments.

The Mildura Solar Farm project was initiated under the previous Brumby Labor Government as part of a scheme which aimed to build 5 to 10 concentrating solar thermal (CST) power stations in the states’ north and west by 2020 bringing needed regional development money and jobs to the north of the state.

It is the first large scale concentrating photovoltaic (CPV) solar power station in Victoria, developed using new solar technology of forty CPV “Dense Array” dish systems. Each dish tracks the sun and reflects a concentrated beam on a solar photovoltaic receiver, which produces direct current electricity and is converted to grid-quality alternating current. (Read more on the technology at Wikipedia)

Another demonstration plant is currently being built in Saudi Arabia with completion due by the end of 2013. Both of these plants will allow assessment of performance efficiency, energy yields and reliability with the aim to drive cost of energy down to A10c/kWh or lower.

Stage 2 development and commercialisation of the technology involves building a 100MW power station with plans well under way. Construction at Mildura is set to commence in 2014. Development of stage 2 has already received funding commitments of $110million from state and federal sources, but is likely to cost between $250 million to $300million with further funding guarantees being sought. Once this plant is up and running Silex will then look for other similar market opportunities in Australia and overseas to roll out this technology.

“We are excited about the economic potential that this unique technology can deliver to Solar Systems and ultimately to Silex shareholders. If successfully commercialised, the deployment of utility – scale solar power stations around the world has the ability to generate hundreds of millions of dollars in annual revenues within a few years. This could be a game-changing renewable energy technology,” he said.

The 1.5MW Mildura pilot plant received $10 million in funding from the Victorian Government, although it was authorised by the Brumby Labor Government, not the present Liberal Party Government in power.

Under stage 2 development of a 100MW power station the company will receive $75 million from the Australian Federal Government under the Low Emissions Technology Demonstration Fund (now under the Australian Renewable Energy Agency-ARENA); and $35 million from the Victorian State Government’s Energy Technology Innovation Strategy Fund. Development is conditional on securing a power purchase agreement and the finalisation of funding arrangements.

The official opening was attended by Victorian Energy and Resources Minister, The Hon.
Nicholas Kotsiras MP who said in a media release:

“The Coalition Government is committed to promoting the development of new renewable and low emissions energy sources that will play an important role in supplying energy to Victorian households and businesses.”

“By investing in the commercialisation of energy technologies the Coalition Government is not only driving new energy sources but we are helping create skilled local employment.”

“Mildura is the perfect place for major solar developments and the Coalition Government wants to see this potential realised so the local community can benefit from the jobs and investment and all Victorians can benefit from new clean energy sources,” Mr Kotsiras said.

Fairfax journalist Tom Arup tweeted this image of the collectors at the official opening. Read his story on the launch here.

However the Minister and the Victorian Government were strongly criticised by Environment Victoria who accuse the Liberal Government of doing very little to promote the development of solar power generation. They highlight the funding and initial support for this demonstration plant at Mildura was initially supported and promoted under the previous Labor Government.

According to Environment Victoria, the Liberal Party went into the 2010 election with the following election promise, but has failed to actively promote and develop large scale solar power stations which would be a major regional employment and development opportunity. Indeed, the Government has twice cut feed-in tariffs for small scale solar PV panels which many Victorians were installing on their residential homes. The 2010 Liberal National Party policy states:

“This is a really exciting project for Victoria, but unless the government changes its tune on clean energy we won’t see other projects like this one for many years.”

“Unfortunately the Napthine Government has failed to support this major growth industry, and has in fact put the brakes on instead.”

“The Napthine government has completely failed to deliver on a major election commitment for Victoria to get 5% of our electricity from solar power by 2020, and currently has no plan to make this happen.”

“Instead of supporting investment in solar from big companies, small business, community groups and families, this government has pulled the rug out from under the solar industry by twice cutting support for those who want to put solar on their roof.”

“Victoria is blessed with fantastic potential for solar energy, and we could see billions of dollars worth of investment into this industry and the new jobs it brings right across regional Victoria.”

“With a real plan to source our energy from solar power, Victoria could see investment and jobs in big solar right across North East, Northern and Western Victoria.”

“This government is stuck in the past with big plans to develop more brown coal, but no recognition of the benefits our state economy could realise with serious support for clean solar power.”

The Liberal Government has already stifled the wind industry with draconian planning regulations that pander to a very small but vocal anti-wind lobby. Reversing this planning regulation could boost regional development in Victoria. While hindering development of renewable energy, the Napthine Government is intent on developing Victoria’s brown coal resources at a time when respected organisations such as Pricewaterhousecoopers, the World Bank and the International Energy Agency are warning of a carbon bubble, the risk of stranded resources, and the danger of not addressing climate change by cutting emissions and transitioning to renewable energy as soon as possible.

While Victoria appears to be stuck in a rut, the Kingdom of Saudi Arabia (KSA) has launched major energy transformation policies to reduce domestic oil consumption through deployment of renewables and installation of nuclear power under the King Abdullah City for Atomic and Renewable Energy (KACARE) policy, initiated in 2010. The Renewable Energy Program alone proposes 54GW by 2032, with 41GW of electrical generation from solar power with a $109 billion deployment budget.

The Silex Stage 2 development of a 100MW plant would provide an excellent investment opportunity for the four Australian major banks to address their problem funding of dirty carbon assets and invest in a low carbon renewable energy project. Just a hint for the ANZ, Commonwealth, NAB and Westpac Banks of the need to transition investment out of coal to renewable energy projects.

Takver Takvera is a citizen journalist from Melbourne Australia who has been writing on climate change, science and climate protests since 2004.

One thought on “Concentrating Solar Power Station launched in Mildura”