The Fund Community Energy campaign is urging the Federal Government to support the emerging community-owned energy sector with a $50 million grant fund. The campaign is now collecting signatures on a petition it will take to Parliament House in June.

The campaign believes politicians risk killing off the infant energy sector if they fail to establish a multi-million dollar  Community Energy Fund.

“While community energy is growing quickly, the new sector they will need support if they are going to succeed,” said Nicky Ison of the Community Power Agency.

“Over 35 communities across Australia are developing community owned wind and solar projects, but only two are up and running. If the other 33 groups don’t receive start-up assistance soon, they risk dying on the vine,” added Nicky Ison. 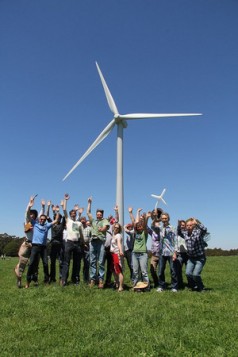 The Community Power Agency’s analysis shows a grant fund can unleash hundreds of millions of dollars of investment in community-owned energy projects.

“$50 million could shepherd at least 75 projects from inception to the investment-ready stage over the next four years. If these projects come to fruition they will unlock over $500 million worth of investment in local communities around Australia,” said Nicky Ison.

The campaign believes community energy is a sector all politicians can support.

“Regardless of party affiliation, community-owned renewable energy projects are something all Australian politicians can support,” said Leigh Ewbank from Friends of the Earth’s Yes 2 Renewables initiative. “The Coalition for Community Energy look forward to the Coalition, the Labor Party and The Greens announcing their plans to support the community closer to the Federal election.”

The initiative is supported by:

The campaign was launched a day after the Liberal NSW government announced $411,000 worth of investment support for nine community energy projects. This leadership from a Liberal state government shows that all political parties can support the community energy sector.

“One of the biggest barriers facing groups setting up a community-owned renewable energy project is a lack of capacity for planning and feasibility studies,” said NSW Environment Minister Robyn Parker.