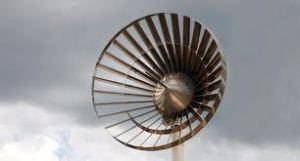 25-years ago, as the blades of  Victoria’s first grid-connected wind turbine started spinning in Breamlea, we had high hopes for a burgeoning industry set to change the shape of the state’s energy market.

Fast forward to 2013 and the hope for Victoria to become a wind powerhouse is being turned into a lot of hot air.

The state government’s restrictive VC-82 anti-wind farm laws are strangling the industry and create an unfair imbalance in planning regulations that favours the fossil fuel industry.

Yet, in the face of tightening planning regulations and reduced state and federal funding, Geelong continues to lead the way with innovative and forward thinking renewables technology, creating sustainable local jobs while addressing climate change.

A Corio company, Geelong Galvanasing has submitted a planning application to install two locally manufactured wind turbines at its Bacchus Marsh Rd base.

The 20m tall Eco Whisper turbines are manufactured locally by the North Geelong manufacturer, Austeng, and are an almost silent device that delivers more power than the traditional three-blade designs.

These turbines are expected to considerably cut the electricity costs of businesses like Geelong Galvanasing by reducing reliance on the grid. Their development also paves the way for Geelong to become a wind powerhouse and industry leader.

North Geelong wind energy manufacturer, Austeng, shows how the transition from fossil fuels to clean, renewable energy technologies is creating jobs – jobs in a safe, clean and sustainable industry that will only increase as the industry expands.

But these turbines may never see the light of day if the state government continues to hold back the industry with its restrictive VC-82 wind-farm planning laws.

These laws have cost Victoria over 2000 jobs, approximately $887 million of stalled investments and the chance to significantly reduce carbon emissions at a time when dangerous climate change is imminent.

Worse still, they are endorsed by Geelong’s local member, Mr Katos, who continues to spout rhetoric that they are what the community wants.

If the Coalition government’s only motive is community concern about the impacts of wind farms then where are the parallel laws for coal and unconventional gas mines?

Exploration and development of these fossil fuels are permitted across the South Barwon electorate. Anglesea residents, for example, have no say over the coalmine just half a kilometre from their local primary school.

Politicians can rant all they like about listening to community concern and cutting emissions but actions speak louder than words and endorsing these anti-wind farm laws just proves they are full of hot air.

It’s time that local member Mr Katos stands up for Geelong’s manufacturers and community-owned wind energy enterprises, and makes the case for scrapping the VC-82 amendment in the Coalition party room.

Put the wind in local MP Mr Katos’ sails with a phone call asking him to restore fairness to the planning scheme.

And while you’re at it, add your name to our petition calling on Premier Napthine to dump Victoria’s anti-wind farm laws.

7 thoughts on “A Whisper in the Wind”