The body spearheading community consultation for the King Island wind farm proposal has released new economic modelling on the costs and benefits of the project. Unfortunately for King Islanders, the study appears to be deeply flawed. It fails to provide meaningful information needed for informed decision making.

The TasWind Consultative Committee commissioned the consultancy CH2M Hill to investigate how King Island’s economy would fare with and without the wind farm. Due to narrow terms of reference it failed to account for some of the most important benefits the wind farm would deliver.

“The construction of the TasWind Project under Model 1 will be accompanied by associated upgrades to existing port infrastructure, accommodation facilities, and the installation of a fibre optic telecommunication cable. Depending on the port design and other costs, these infrastructure upgrades may result in a range of indirect benefits to the King Island economy and community but further analysis will be required. While the impact of these indirect benefits has not been explicitly considered in the economic model, the potential benefits will not accrue to the King Island economy or community under Model 2.”

Not “explicitly considered” means not considered. You don’t have to be an economist (or a rocket scientist for that matter) to understand how upgraded port facilities and expedited access to the NBN will strengthen the local economy. CH2M Hill’s finding that King Island’s economy will be better off without the wind farm should be taken with a grain of salt.

The striking omission of improved port facilities and high-speed internet access also raises doubts about the consultation process. How on earth was such a deeply flawed methodology approved?

If the release of this flawed economic study demonstrates one thing, it’s that only a full feasibility study can provide King Islanders with accurate information on the costs and benefits of the wind farm. But not everyone wants a feasibility study to go ahead. Local wind farm opponents have engaged anti-wind farm campaigners and a PR firm to kill off the wind farm before it even gets to that stage.

In April, the No TasWind Farm Group hosted Sarah Laurie–who Renew Economy describes as a ‘dedicated anti-wind farm campaigner’–to present to the community about alleged health impacts of wind energy (these claims are thoroughly debunked by Professor Simon Chapman here). Laurie’s efforts have made headlines when it was revealed that Australia’s peak body for medical research, the National Health and Medical Research Council, is investigating the campaigner for breaching medical research ethics codes.

In May, Crikey reported that the No Tas Wind Farm Group had enlisted Sydney-based PR firm Wells Haslem to help turn the community against the wind farm proposal. Wells Haslem is a spin off from Jackson Wells PR, the firm which has worked for the climate change denying Galileo Movement and ‘Lord’ Christopher Monkton.

Clearing away the fog of misinformation, wind farms create jobs and investment for regional communities. A study Sinclair Knight Merz shows the wind energy sector is a boon for the regional towns. The report shows a typical 50-megawatt delivers $250,000 worth of income for host farmers each year; around $1.2 million flow-on benefits to the local economy; invest up to $80,000 in community projects each year; 48 jobs during construction and five ongoing jobs in operations and maintenance. 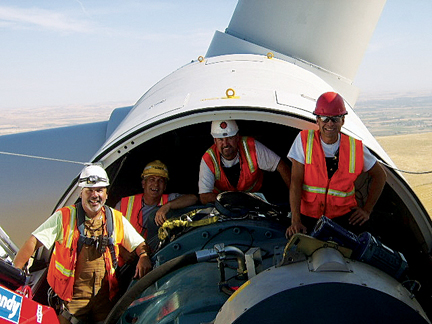