Published by the VicWind Alliance. View the original article.

When the Macarthur wind farm, the southern hemisphere’s largest wind farm, was officially launched on Friday it marked the completion of a remarkable journey for local farmers Tom Robertson and Hamish and Anna Officer.

In 2001 Tom, Hamish and Anna began their search for companies who would build a wind farm to generate clean, renewable energy on their properties, 20km east of Macarthur in South Western Victoria.

In the 12 years since then, with long months of challenging negotiations, a global financial crisis and numerous twists and turns there were several times when all seemed lost. But finally in 2011 luck started running their way and the contract for the project we see today was signed.

As Vestas global Chief Executive Ditlev Engel, who traveled from Copenhagen for the opening, said, quoting Walt Disney, “if you can dream it, do it.”

AGL Chief Executive Michael Fraser described the Macarthur wind farm as a “nation-building” project that had the wider support of the surrounding community.

However, he also acknowledged the concern of some neighbours and said claims of noise and infrasound issues would be investigated on a case-by-case basis and noise monitoring results would be made publicly available.

Speaking to me at the wind farm launch, Hamish Officer, one of the three Macarthur wind farm hosts and a VicWind founding member, told me that now that construction was done, things were pretty much back to normal on his farm.

He had destocked slightly during the construction of the wind farm but his animal numbers are now returning to normal levels. 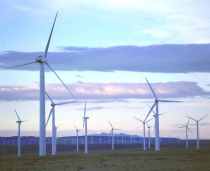 The 46 towers on his property take up only about 1% of the grazing land, with a number of roads built to access the turbines. Hamish said these roads (gravel tracks) had a negligible impact on the productivity of the paddocks and have actually provided significant increases in productivity by vastly improving all weather access around the property

There are five turbines within 750m of their house, and Hamish said these had not had any impact on their health or comfort levels. Tom reports similar conditions at his home.

This was only the beginning of the state’s entrance into renewable energy, with 1100 new turbine locations approved by the state government and waiting to be built, he said.

Macarthur’s 140 turbines, which are spread over an area 6km by 10km, “look magnificent out there – majestic.”

He was impressed that the Macarthur wind towers, though they were only slightly taller than those erected at nearby Codrington 12 years ago, generated twice the electricity of their Codrington counterparts.

The Macarthur project had employed 800 people during the construction phase, with the skills gained by local contractors and tradesmen “standing them in great stead for the future.”

Roslyn also praised wind farm staff for their active support and assistance during a recent fire at nearby Minhamite.

It felt a real privilege to see firsthand the positive local aspects that new industries such as wind farming can bring to rural areas. Macarthur wind farm has already and will continue to provide employment and training as well as much needed support for local community organisations such as the local fire brigades. The twenty full time staff who will work at Macarthur for the next twenty five years will not only become part of this community but they will help strengthen it as they and their families live and grow in the south west.

One thought on “Farmers’ dreams realised at Macarthur”