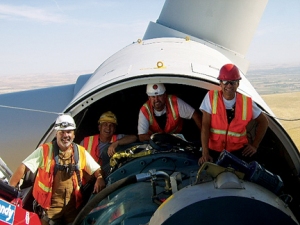 Regional Victorian communities are being robbed of benefits from the clean energy economy because of fear campaigns than have no basis in fact.

A study commissioned by the Clean Energy Council shows the wind energy sector is a boon for the regional towns. The report shows a typical 50-megawatt delivers the following benefits:

The University of Sydney study raises fresh doubts about anti-wind farm lobby’s claims of a ‘wind turbine syndrome.’ It suggests the ‘nocebo’ effect explains the health complaints wrongly attributed to wind farms. A nocebo effect occurs when people feel health problems after being told something is harmful.

The psuedo-science trumpeted by opponents of wind energy is reminiscent of the anti-vaccination campaign from a few years back–a campaign which was exposed as a sham.

It’s time to shirk off the fear campaign and look at the real benefits wind energy deliver regional communities. Since the blades of the first turbines started spinning, wind farms have generated $4 billion worth of investment in Australia.

According to the Victorian government’s own figures, in 2009 alone the wind energy sector pumped $1.2 billion into the Victorian economy. Landowners and councils stand to gain yearly payments in order of $16 million and $4.6 million respectively if the state’s approved wind farm projects are built.

Friends of the Earth invite Victorians to join us in saying ‘no’ to the nocebo effect and ‘yes’ to renewables.