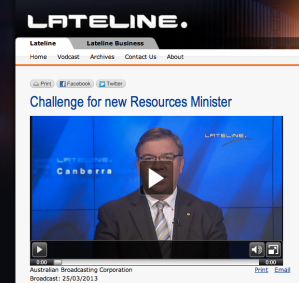 Environmental campaigners and climate/energy journalists were quick to point out public statements Mr Gray had made denying the science of climate change. Yes 2 Renewables was one of the groups that called for Minister Gray to clarify his approach to climate change.

EMMA ALBERICI: Do environmentalists have anything to fear about your appointment to the Resources Ministry?

GARY GRAY: I’d sincerely hope not. I think that our resource industry rests on a secure and sound environmental approvals process. And Emma, we have to get those processes right in order to give certainty to the projects which need effectively bankable approval processes. So, in my view, a good approvals process is as essential to a successful mining operation as good engineering and sound banking.

EMMA ALBERICI: The Greens Leader Senator Christine Milne says that by appointing you as Resources and Energy Minister the Government is it now in retreat on addressing global warming.

GARY GRAY: Well, I wouldn’t expect my appointment to be applauded by the Greens. I wouldn’t ask that. I’m not a Green. I’m a Labor minister. I’ve been a member of the Labor Party since I was 16. I am not a Green, Emma, and any Green who thinks I am a Green is sadly mistaken.

EMMA ALBERICI: We all understand the shortcomings of minority government, but do you think the Greens have had too much sway over the Gillard Government?

GARY GRAY: No, I don’t. It’s been a government that’s worked in difficult circumstances, but remarkably successfully. A government that’s had to bring together majorities on the floor of the Parliament and has passed a record number of items of legislation. So I think it’s been a successful parliament, a difficult parliament and trying at times, but Emma, it’s been most trying for Tony Abbott who’s been most unsuccessful at being able to put together majorities on the floor of the House to prosecute and support his arguments.

EMMA ALBERICI: Are you a climate sceptic?

GARY GRAY: No, I’m not. I was. I was. I was a vocal climate sceptic. And as national secretary of the Labor Party I said things that frankly, Emma, nowadays embarrass me when I hear it played back.

EMMA ALBERICI: Did you say that, “… climate science was middle class conspiracy to frighten schoolchildren”?

GARY GRAY: I did.

EMMA ALBERICI: And you called it “pop science”?

GARY GRAY: I did.

EMMA ALBERICI: What changed your mind?

GARY GRAY: When I joined Woodside in early 2001, I was exposed to a company whose own insights into the environment in which it operated was far in advance of mine. I was fortunate to work with terrific engineers and outstanding environmental scientists who were capable, Emma, of extracting oil and gas in the most delicate marine environments. I was in awe of that work. And in getting closer and closer to those engineers and serious builders of business, I began to realise not only was I wrong, but if you get the equation right you can actually build better businesses and build a better future. I became a convert to that.

EMMA ALBERICI: So can I just clarify then: do you reject now the Lavoisier Group, the climate deniers, and do you accept that the globe is warming and that human activity is responsible?

GARY GRAY: I don’t think there’s any doubt about that conclusion, but equally, Emma, there is no doubt that I attended the inaugural meeting of the Lavoisier Group and I counted and still count as friends members of that organisation. I just don’t agree with them anymore.

EMMA ALBERICI: So you do agree then that it’s human activity that’s causing the globe to warm?

GARY GRAY: I think there’s an undeniable connection between human industrial activity and carbon pollution that we need to address, that we should address and also that we can address.

Minister Gray has paid lip service to climate change, yet Australians will soon know how serious he views the threat.

If Mr Gray follows the path of his fossil-fuel loving predecessor Martin Ferguson, then it will be clear he is a closet climate denier. If, on the other hand, the minister manages to accelerate the rollout of renewable energy projects such as wind farms and large scale solar, we’ll know he has changed his tune.