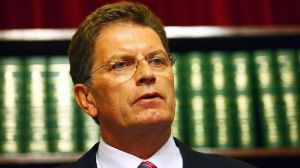 Research by Friends of the Earth/Yes 2 Renewables estimates that the wind policy championed by Ted Baillieu has cost Victoria:

In terms of climate change action, the laws have:

“There is no doubt that Ted Baillieu was ideologically committed to opposing wind energy” said Friends of the Earth renewables spokesperson Leigh Ewbank. “The new Premier, Denis Napthine, does not have the same ideological baggage.”

“As Minister for Regional Cities, who represents an electorate that has benefitted from the jobs and investment that comes from a thriving renewables energy, Mr Napthine is well placed to overturn the regressive planning law VC82, and reestablish Victoria as a place where the wind industry can expand”.

“South Australia has been the main beneficiary of VC82, with massive development of the wind sector in recent years. Job opportunities, investment and income for farmers and local Councils have moved west as a result of Ted Baillieu’s ideological opposition to this clean energy source.”

The wind turbine tower manufacturer Keppel Prince, based in Portland, now employs 65 people and could employ many more if the laws are changed to facilitate wind farm developments in the state.

“It is time to restore fairness and consistency to the Victorian Planning Scheme by revoking VC82. We urge the Premier to reconsider this policy which has done little more than kill off investment and jobs in the renewable energy sector”.