Skip to content
If there’s one thing Wonthaggi has plenty of it’s wind. Energy researcher BEN COURTICE looks at whether it could prove to be one of the shire’s biggest assets.

IF YOU install solar panels to offset your entire electricity use, you pay no electricity bill – you may even get a credit. There are options to achieve this on a larger, regional or town scale, if communities work together.

Wonthaggi could supply all its own energy, on an annual basis, from a small wind farm. In fact, it could easily be a net exporter of large amounts of renewable energy, via the electricity grid, as the wind resource in the region is better than most parts of the country.Crunching the numbers based on the existing information makes this clear.The small existing Wonthaggi wind farm has a nominal capacity of 12 megawatts (MW) from its six turbines. Its annual output in 2011 was 28.3 gigawatt-hours (GWh). 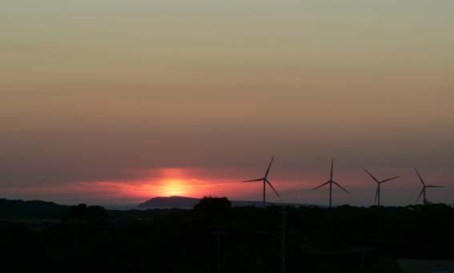 With a population of just under 6900 in 2011, Wonthaggi has about a third of the Shire’s mainland population. Assuming a similar proportion of electricity use, that makes about 25 GWh per year energy use (using state government energy use figures from 2007).

That’s less than the output of the wind farm. So six two-megawatt turbines can do the job now.

If the aim is energy independence, though, much more can be done.

If households in Wonthaggi reduced their own energy use, then more clean energy would be exported to other, less windy regions such as Melbourne’s suburbs.

Most Australian houses are poorly designed and/or badly built. They have too little (or no) insulation, they are not effectively faced towards the sun, windows are not shaded in summer, there are air draughts, and houses often compensate for these deficiencies by using large amounts of energy for heating and air conditioning.

Beyond Zero Emissions’ research shows that existing Australian homes can reduce their energy use by over 70 per cent on average, if they make the right changes.

These measures don’t just reduce fossil fuel use at the power station, they also reduce energy bills and increase the comfort and health of households.

Although Wonthaggi does not have the best sunshine in the country, the cost of solar panels has fallen so much in recent years (and power prices have risen so much) that it is still cost-effective to install rooftop solar panels, bringing another big saving in energy use.

Small wind turbines, which only generate for the premises where they are installed, are permitted in most of Victoria, and can also help households to achieve net zero (or less) electricity use.

By finding ways to undertake these measures, perhaps with government programs to support them, home-owners can expect to save money in the long run on their energy bills. And with this kind of energy use reduction, Wonthaggi would then require only 2-3 wind turbines to supply its annual energy needs for current services.

As electric cars become more popular, extra generating capacity would be needed to keep their batteries charged – but once again there would be savings in the long run. Petrol prices are only going up, not down.

Lastly, the Bass Coast region could export clean energy to areas such as Melbourne that don’t have its fabulous coastal wind resource, and even further afield via the national energy grid. The region could host numerous small to medium scale wind farms.

Community-owned wind turbines could be a great community-building resource for the Bass Coast, supplementing the existing, privately owned wind farm.

The revenue generated could fund local projects, the town would literally own its own energy supply, and it would go that bit further to weaning the state off its dirty coal dependency.

These planning laws are the main impediment to sensible development of clean, renewable wind energy in Victoria. They ban new wind farms from whole regions, including the Bass Coast. They also ban wind farms within two kilometres of any existing residence, unless the developer secures written permission from the house owner. This makes it very difficult to get a wind farm off the ground anywhere, even outside exclusion zones such as Bass Coast and the Macedon Ranges shire.

This law has already halted wind farm developments. It even bans small community-owned, well supported projects such as the Woodend community wind farm project in the Macedon Ranges shire.

Given that exploration for new coal mining is proceeding across the state with little restriction, the wind laws seem disproportionate and discriminatory. A coal mine, with all its known and serious threats to health and amenity, may be built 100 metres from existing residences under Victorian planning laws. Wind farms, probably the safest and cleanest energy source we have, are barely able to proceed anywhere in the state.

Friends of the Earth has been calling for the government to review its wind farm planning laws. As a first step, allowing small community-owned wind farms to proceed would be a popular and fair measure.

Secondly, the large no-go zones and two-kilometre setbacks seem to be based on appeasing a small minority of outspoken, often wealthy, even absentee landowners. Most people in country Victoria support wind farms and want them, for the income and employment they bring as much as for the clean energy.

Friends of the Earth wants the no-go zones and two-kilometre setbacks to be replaced with planning regimes consistent with other developments. Restrictions should be based on actual noise and visual imposition on significant landscapes, not arbitrary setback distances that lock out most of the state.

That’s not stopping Wonthaggi residents from forging ahead with energy efficiency, and with rooftop solar panels, until the anti-wind farm laws are overturned – as we are confident they will be, when enough Victorians realise how unfair and illogical they are.

Ben Courtice works as the media co-ordinator at Beyond Zero Emissions and works on the Friends of the Earth renewable energy campaign in his spare time.

2 thoughts on “A turn for the better”