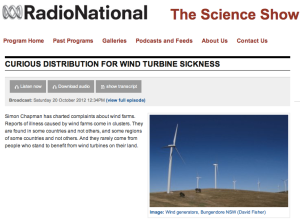 The risk of adverse health impacts is a key argument organised opponents use in their case against wind farms.

More than 17 peer-reviewed studies have shown turbines do not affect health—that of humans, animals or even earthworms (as suggested by some anti-wind energy campaigners). Australia’s authority on public health research, the National Health and Medical Research Council, says (2010)  ‘There is currently no published scientific evidence to positively link wind turbines with adverse health effects.’

Unfortunately,  despite the absence of credible, scientific studies linking wind turbines to health impacts, this idea has taken root in regional communities. The notion spread by persuasive propaganda presentations in town hall meetings that follow proposals for new wind farms.

At the weekend, Professor of Public Health Simon Chapman (University of Sydney) joined ABC Radio National‘s Science Show to clear the air on the issue of wind energy and health. In his reading of an article penned for New Scientist,  Professor Chapman busts the myths of the so-called ‘wind turbine syndrome’. You can listed to the reading here.