In September, the Yes 2 Renewables campaign joined forces with Beyond Zero Emissions to tour southwest Victoria.

The purpose of our trip was simple: Yes 2 Renewables wanted to gain a local perspective on wind farms, and update the community up about the Baillieu government’s renewable energy policies—particularly the impact anti-wind energy planning guidelines.

While day one of the southwest tour focused on public presentations and meeting community groups, on day two we found ourselves on the factory floor of a wind turbine tower manufacturer and up-close-and-personal with operating wind turbines.

‘Renewable energy’ and ‘green jobs’ are terms often seen together in literature on climate change action. Usually, when I encounter ‘green jobs’ they appear as abstract statistics estimating the employment potential of different policy scenarios, but not today.

Keppel Prince Engineering is the second largest employer in Portland. The firms wind workers play a crucial role in the Australian energy sector: adapting Chinese designs to meet national specifications and manufacturing the enormous towers to support the caravan-like nacelles (the unit that houses the generator and gearbox, etc).

Historically, KP gained much of its work from Alcoa’s Portland Aluminium smelter, but the firm is increasingly servicing the nascent renewable energy sector. Already well known for its work on wind farms, Keppel Prince has branched out into rooftop solar installation and was recently awarded a contract to work on the pioneering wave energy project that will reside 6 kilometres from the coast of Portland.

Production supervisor Stuart Batten guided Ben and I in a tour of KP’s engineering facility. Dressed in the appropriate OH&S gear we observed the machinery involved in each stage of tower fabrication, the huge heated paint room used to give the turbines their iconic white finish, and the storage yard, which on this occasion was hosting several towers and nacelles.

Despite the readiness of the facilities and the capabilities of the workforce, it was striking to see many idle hands at Keppel Prince. The Baillieu government’s regressive wind farm planning guidelines are a key explanation for the slow down. Friends of the Earth’s analysis found that since August 2011, the Baillieu government’s wind energy planning regime has cost Victoria up to:

Most of these withdrawals came from Victoria, where the Baillieu government has introduced severe planning restrictions, with 14 of the 18 previously publicly announced wind farm proposals that are now unlikely to proceed located in that state.

The ESOO document does not say specifically that these wind farms were victim’s of Baillieu’s planning laws, but the number of Victorian withdrawals is more than just coincidence. There are many more hanging in the balance. 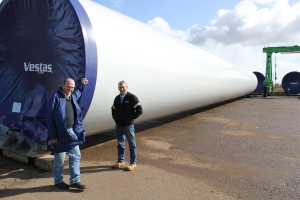 It is trends like this that worry Keppel Prince’s wind workers. During morning tea, Ben Courtice and I updated them on the Yes 2 Renewables campaign and the ways in which the Baillieu government’s planning guidelines are costing the state. Several workers expressed genuine concern about the state of the wind energy sector and what that means for their community and livelihoods. These lived impacts underscore the need for the Baillieu government to restore fairness and consistency to the planning scheme.

Pacific Hydro’s Cape Bridgewater wind farm is not visible from the township (it was designed that way), but once you ascend to the top of the rolling hills the towers stand proud and tall. The turbines spin consistently, transforming the forceful gusts that batter the southwest coast into clean, renewable electricity.

While I have driven past dozens of wind farms in my time, this was the closest I’ve been to an operating turbine. Even under what appeared to be perfect conditions for the turbines—you know, bloody windy—the noise was tolerable. ‘There’s a rhythmic tenor swooshing, and a quieter, higher-pitched whine from the gearbox,’ wrote New Matilda journalist Ben Eltham, who visited the wind farm that same day. ‘Both sounds are difficult to pick out against the much louder noise of the wind itself.’ The presence of the turbines and the ambient noise was no problem for the cattle grazing freely within metres of the turbines.

The Cape Bridgewater wind farm is stage two of the Portland Wind Energy Project. Its 29 turbines have a capacity of 57 MW and produce enough electricity to power 35,000 Victorian homes. In terms of climate change benefits, since it began operation in 2008, the project has prevented the emission of 195,000 tonnes of greenhouse gas each year—the equivalent of removing one million cars from the road.

With a slight detour, our journey back to Melbourne took us past the massive 420MW Macarthur wind farm. Turbines stretched out across the horizon form the largest wind farm in the southern hemisphere. Its 140 turbines will produce enough electricity to power 220,000 homes, or as the ABC puts it, ‘enough power to service Geelong, Warrnambol, Bendigo and Ballarat.’

The Macarthur wind farm will make a significant contribution to addressing climate change. Unfortunately, due to the Baillieu government’s anti-wind farm laws it’ll be a while before Victoria gains another wind farm of this scale.

A few kilometres east of Macarthur brings us to the site of the Hawkesdale wind farm. Union Fernosa will erect 31 turbines to have to combined capacity of 62 MW.

Touring southwest Victoria was eye opening. It was great to meet locals passionate about addressing climate change and experience the transition to a renewable energy economy first hand.

Reflecting on this transition brings to mind Peter Reefman’s vision for Portland’s future, which he articulated during our dinner with the Portland Sustainability Group. Portland, Reefman suggests, has the opportunity to be a renewable energy hub with  thriving renewable energy education, training and manufacturing sectors. Reefman’s vision of prosperous and resilient communities through sustainable development isn’t just applicable to southwest Victoria—It stands as a microcosm for Victoria, and indeed Australia.

The supporters of the fossil-fueled status quo speak only of losses. These voices are among the loudest in the national discourse and  crowd out those with the sense to see that renewable energy is good for this country. It’s time for Australian politicians, business leaders, and media commentators to take a leaf out of Peter Reefman’s book and openly acknowledge the opportunities within Australia’s grasp, if only we make the commitment.