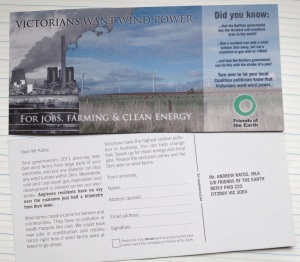 At the weekend, Friends of the Earth’s Yes 2 Renewables campaign ventured out to the marginal electorate of South Barwon to raise community awareness of the Baillieu government’s anti-wind farm planning policy.

Last August, Minister Matthew Guy amended the planning scheme to create arbitrary ‘no-go zones’ for wind energy projects and an unprecedented 2km setback from residences. The laws ban wind farms from large parts of the South Barwon electorate and allow just one objector to stop any wind turbine within 2km.

So far, the Baillieu government’s anti-wind farm planning amendment, VC82, has stalled the state wind energy industry. A comprehensive report by Friends of the Earth estimates the collapse of Victoria’s wind-farm project pipeline has cost Victoria up to:

The Baillieu government’s double standards on energy issues are becoming ever more apparent. Their concerns about the impacts of wind energy projects to not extend to coal and coal-seam gas. Exploration and development for these fossil fuels is permitted across the South Barwon electorate. Anglesea residents, for example, have no say over the coalmine just half a kilometre from their town.

Over just a few hours, a band of dedicated volunteers—including members from the Geelong Sustainability Group, Surf Coast Energy Group, and the Australian Manufacturing Workers Union—managed to distribute an upwards of 1750 postcards in Belmont, Torquay and Jan Juc. (And that was just the first wave of letterboxing).

Journalists from The Geelong Advertiser stopped by for a chat. They we’re interested to find out how the Baillieu government’s anti–wind farm planning laws have hit the industry, as well as how wind energy can benefit the region. As a result of our action, Local Member Andrew Katos has made his position on wind energy known. You can read The Geelong Advertiser’s report here.

Thousands of postcards will eventually end up in the inbox of Liberal Member Andrew Katos, asking him to stand up for wind energy, and the jobs, investment and clean renewable energy supplies that accompany it. If you’re a South Barwon resident and would like your local MP to support wind energy you’re welcome to join our campaign. All you have to do is email  leigh.ewbank [at] foe.org.au