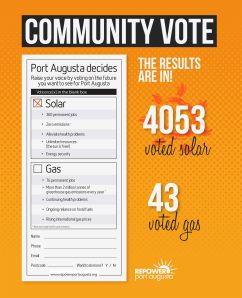 An overwhelming majority, 98 percent of participants, support concentrating solar thermal to replace the city’s aging coal generators. The community has rejected the proposal to replace the Northern and Playford B coal plants with gas. With a meagre 2 percent support, the gas option has gone down in flames.

Repower Port Augusta, the community group who spearheaded the initiative, collected the votes of 4096 Port Augustans. The impressive sample of 28 percent of the population means the pro-renewables result cannot be dismissed.

The Port Augusta poll result tells a strikingly familiar story about public support for renewable energy. It can be seen as a localised expression of a larger trend. In poll after poll, renewable energy is shown to be incredibly popular with Australians.

Public support for renewables has remained consistently strong for years. In an EMC poll from November 2010, 79 percent of respondents support government assistance for the renewable energy sector, with 56 percent supporting direct subsidies and grants for renewable energy technologies.

In 2011, the CSIRO’s Communication and Climate Change: What The Australian Public Thinks (PDF) found ‘Most Australians… exhibit a strong preference for renewable energy.’ An astonishing 80 of those polled support government action to increase renewable energy research and development.

Another EMC poll, this time from 2011, identified high public support across a range of renewable energy-related questions (see figure below*). This poll 89 percent agreed in ‘Investing in renewable energy is good for people and the environment’ and 87 percent thought ‘There should be more investment in renewables like solar and wind.’

When public polling is taken into account it’s clear that Port Augustans aren’t alone in saying yes to renewables—Australia says yes too. Unfortunately, strong public support has not translated into ambitious and effective renewable energy policies at either a state or federal level. There is now a yawning gulf between the public’s preference for renewable energy and the preferences of our politicians (with some exceptions).

When will Australian politicians start representing the will of their electors on renewable energy?

* These poll questions were asked in the weekly omnibus conducted by Essential Research from 27th to 31st July 2011 and is based on 1,019 respondents. The survey was conducted online.