Over the past four years, claims have been made that large wind turbines cause a wide range of adverse health effects, including tinnitus, headaches and memory and balance problems.

In response to this, there have been 17 Inquiries around the world. All have concluded that there is no scientific evidence for the claims. This has placed the opponents to wind power on very shaky ground.

Now this ground has become even more unstable with the publication of a paper by a former energy economist and researcher, Neil Barrett. Barrett has had a long term interest in wind power since the first turbines were built in Europe in the 1970s. In 2006, he spent a week interviewing people living and working around two large wind farms in Germany . “At that time I heard nothing about any adverse health effects, said Barrett.

“Three months ago I contacted some of the people I met in 2006 and they confirmed that health effects from wind power are not a significant issue on the agenda in Germany. This is despite the fact that Germany has around 22,000 turbines in an area not a lot bigger than Victoria and much more highly populated.

“Intrigued by the difference between Australia and Europe, I decided to study the situation in both Germany and Denmark more closely. I wrote to MPs and examined over 100 websites of wind opponents, including 80 referred to in glowing terms by Germany’s main conservative newspaper, Der Spiegel.

`The opponents to windpower in Denmark try to raise the issue of adverse health effects but with little success. It is just not an issue which has achieved much traction in this country. Windpower has strong public acceptance and a majority in parliament support the expansion of windpower capacity, both onshore and offshore’.

“And the Chief Whip for the Greens in the German parliament, Volker Beck, stated that: `Health effects are currently no issue in the debate about wind power in Germany’.

“Even more telling”, writes Barrett, “was the evidence from Wind opposition websites. Of the 80 opposition websites I examined, only 18 devote more than two lines to health effects and not one of them refers to particular cases where individuals have claimed illness or moved away from the turbines. Nor could I locate any press reports of such events. 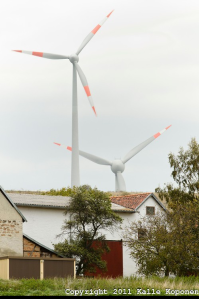 “I believe there are at least three reasons for the difference between Australia and Europe. One is that the Europeans’ fear of nuclear power makes wind power more attractive. A second is the greater concern about climate change which has led Germany to decide to leave its large brown coal reserves in the ground.

“And the third is the much greater power and influence of the fossil fuel lobby (sometimes called the Greenhouse Mafia) in Australia. Some of the most prominent people and organisations making the health effects claims have close ties to fossil fuel companies.

“One of these is Peter Mitchell who established the Waubra Foundation. Mitchell has spent 25 years in the Australian mining industry and was the founding chairman of Moonie Oil Ltd. He has also successfully fought a wind farm proposal at Stockyard Hill . It is certainly food for thought”.

10 thoughts on “Wind turbines not a health problem, say Germans and Danes.”