“In the year to October 2011, just under 10 per cent of Australia’s electricity came from renewable energy. This represents a large rise on previous years due to a resurgent hydro sector and more power generated by the country’s wind farms. ”

This is the information highlighted in NewEnergyNews from the December report by the Clean Energy Council. 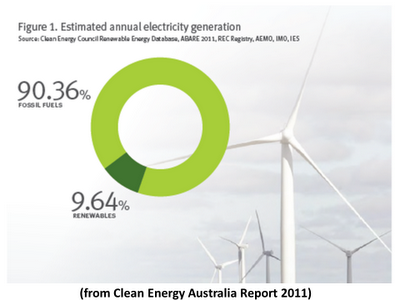 “Australia’s electricity generators produced over 300 terawatt-hours of electricity in the last year to the end of September 2011.The contribution of renewable energy rose to 9.6 per cent of the total electricity produced during this period, up from 8.7 per cent the year before.

“Many of Australia’s key hydro catchments experienced the best rainfall in years following a long period of drought and additional generation from new wind power lifted the renewable energy generation total higher than in previous years. Household solar power still contributes a modest proportion of Australia’s renewable energy, but its record growth in 2010 and 2011 is starting to reduce demand across the country while making a significant contribution to the country’s energy mix.”

As the CEC noted in their press release, “Over one million Australians now live in a solar household. Solar power has come of age and is now a real part of Australia’s energy sector.”

We are still dwarfed by Germany, for example – who installed 7.5GW of solar in 2011 – but some progress is clearly being made. While the increase is partly accounted for by the increase in capacity of longstanding hydro capacity, new wind power is also beginning to make a difference. 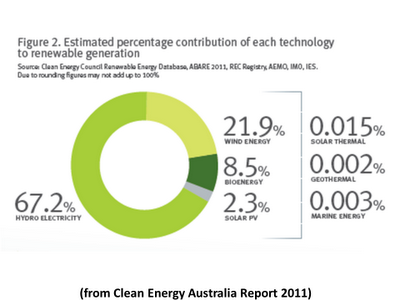 CEC director Kane Thornton is quoted in their press release:

“We are already starting to see a boost from the energy produced by wind farms, with wind energy supplying enough clean electricity to power the equivalent of around 900,000 homes. Wind power is the lowest-cost form of renewable energy that can be rolled out on a large scale and we expect it to play a major part in meeting Australia’s 20 per cent renewable energy target by 2020.

You can download the full report here, and the NewEnergyNews article continues to summarise some of the findings in more detail here.