Recently the role of the “merit order effect” in the National Electricity Market (NEM) has been discussed in a number of articles about renewable energy.

I’ll follow up tomorrow with a survey of current discussion around whether the electricity market as it currently exists is really working, and outline some of the strains that are being placed on it by the entrance of renewables.

Author Sharon Beder, in her 2003 book Power Play, related the increased pollution resulting from the greater use of Victoria’s brown coal power stations, following privatisation in the 1990s and the setting up of the NEM.

“The amount of electricity generated by brown coal plants, the most polluting in terms of greenhouse gases and other emissions, has increased from about 23 per cent to 31 per cent of sources since 1992. The increasing dependence on brown coal is because deregulation causes companies to seek the cheapest source of electricity with no consideration for environmental impacts. Brown coal is cheap, and dirty, old brown coal plants that have paid off their loans can produce electricity at low marginal costs.

“A report commissioned by electricity distributor Origin Energy found that this meant that Victorian brown coal plants had, to a certain extent, displaced the cleaner NSW black coal plants and SA gas plants in electricity generation. Even outside Victoria baseload electricity tends to be generated by old coal plants rather than the newer gas-fired plants that emit less carbon dioxide. The latter tend to be used for peak loads because marginal costs are higher.”

“Low marginal costs” means that they don’t have large up-front costs when they generate electricity. Brown coal is very cheap to obtain, it does not (yet) trade on the international market.

The price pool: how it works

To illustrate the price pool, which is typical of how electricity markets around the world operate, I’ve produced two charts. It should be made clear that these charts are simply an abstract representation to illustrate my point.

The first is to explain the price pool, how prices are determined for any given period of electricity generation. 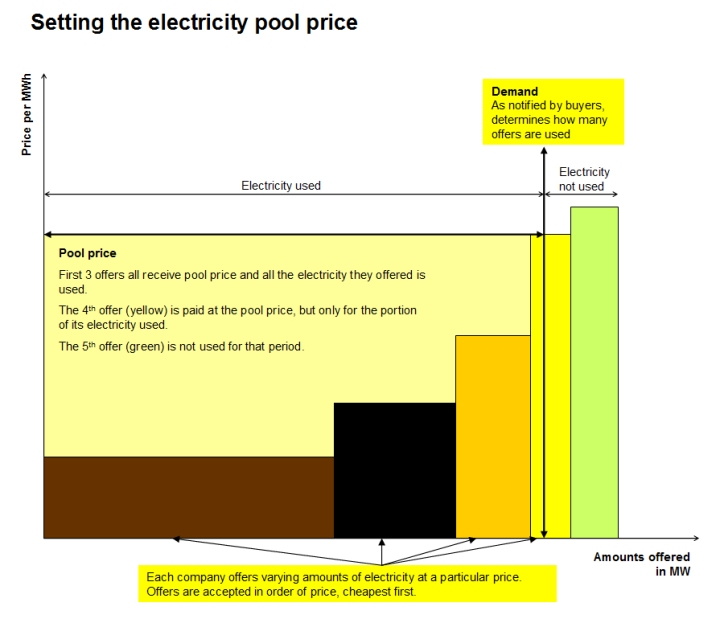 In the electricity market, the generators bid to sell a certain amount of power for each block of time throughout the day, each block being a period of 5 minutes. If you’re keen, you can look at current NEM spot market data here.

They bid to sell a certain amount, at a stated price. The NEM operator then calculates how much energy will be needed, and allocates the bids starting with the cheapest, until the projected demand is met.

The price received for the generators who find their bid accepted is not the price they each bid, but the price of the highest bidder who was accepted for that block of time. Any higher bids, that are not found to be needed, do not sell their energy for that time period.

In this system, the coal powered generators tend to bid in low because they can’t just switch off like gas turbines can, and their fuel is relatively cheap (especially brown coal). It’s the gas power stations that bid higher, and when they are used will raise the pool price for that period.

In fact, many gas plants are only used infrequently for high peak demand loads when a lot of electricity is required to run aircon on hot days. Some peaking gas plants may run as low as 5% of their capacity, averaged over the year, as Mark Diesendorf pointed out in his 2007 book “Greenhouse Solutions with Sustainable Energy”. They make up for this low capacity utilisation by charging high prices when they do come online.

Here’s a second chart, illustrating what can potentially happen when a significant amount of renewable energy enters the grid, such as from wind farms:

As you can see, in this case, the amount of wind power would bring down the price. Wind farm owners have no interest in holding out for a better price: if the wind is blowing, they might as well sell the electricity they generate, so it bids cheap.

You don’t have to go to Denmark or Spain to register that wind farms are having a large positive impact on electricity supply. South Australia now get 20% of their electricity from wind farms. Wholesale electricity prices in SA are at their lowest since the market began. The following graph was presented in a draft AEMO report, “2011 South Australian supply and demand outlook” (draft, March 2011).

What we can see is that SA’s coal and gas are staying roughly the same, but the import of Victoria’s 85% brown coal electricity (dark blue), has dropped in almost inverse proportion to the share of wind power (light blue).

Over the same period, despite an increase in annual electricity use, carbon emissions declined from 9.8 million tonnes CO2e to 8Mt.

The anti-wind power brigade tell us that for every wind farm, you need to build an open-cycle (peaker) gas power station to back it up for when the wind isn’t blowing. In fact, the amount of gas power built in this time is only proportionate to the growth in peak demand; it is still roughly the same percentage of overall capacity.

The obvious conclusion is that renewable energy works: it delivers clean energy as it’s supposed to, and has a bonus on energy prices.

Prices have indeed been rising across Australia, due to the need to replace ageing infrastructure (power poles and lines, for example); also due to rising peak demand spikes. But the subsidies to renewable energy make up a tiny fraction of the overall price increase, and if renewables reduce wholesale prices nationwide then this could well outweigh the investment in subsidising them.

To conclude this section, here is one illustration of peak prices jacking up the overall wholesale cost, the following graph is from the Zero Carbon Australia 2020 stationary energy plan:

Stand by for part two of this tomorrow, where we will look at some of the implications of this system for the rollout of renewables!