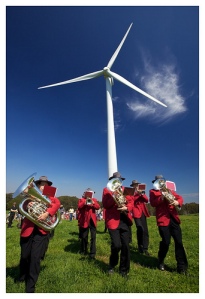 The Hepburn Community Wind Farm, at Leonards Hill in Hepburn Shire, was declared officially open yesterday when 10 year old Neve Bosher of St Augustine’s School in Creswick cut a massive ribbon wrapping the girth of a 68m high wind tower, in front of more than 760 people.

Miss Bosher beat a field of 147 other school children in the region, in a competition to name the 2 REpower wind turbines. Her winning names are Gale and Gusto.

As part of her prize, Neve was given a small parcel of shares, joining 1900 others who jointly own Australia’s first community-owned wind farm, 10 km south of Daylesford, in Central Victoria.

The wind farm has been built by a community that decided six years ago to begin taking responsibility for their energy needs. The two turbines are projected to produce more energy than the houses in Daylesford use each year.

Per Bernard, founder of Hepburn Wind said, ‘In Denmark, where I was born, most wind farms are owned by communities. I am so proud that the Hepburn community has come together to benefit from renewable energy.’

Vicki Horrigan, chair of the Hepburn Wind Community Fund announced grants of $15,000 to community groups for causes as diverse as an arboreal tree mammal research project in the Wombat Forest, a community arts project by the Bungal Arts Depot in Ballan, welding equipment for the Daylesford Men’s Shed and play equipment for the Clunes Playgroup.

The community fund is supported by profits from the community wind farm as well as Red Energy, who purchase all of the output from the wind farm.

The success of the ‘Hepburn Model’ has inspired communities across the nation to build similar projects, including the neighbouring communities of Woodend and Castlemaine.

Initiated with the support of Sustainability Victoria, the project recently received a prestigious Banksia Environment Award as well as the Victorian Premier’s Sustainability Award. Despite these accolades and the overwhelming local support, the project would have been blocked under the new Victorian planning regulations, announced six weeks ago. The Woodend and Castlemaine projects are in limbo waiting for the government to clarify their policy in relation to community wind farms.

David Karoly, one of Australia’s leading climate scientists, said ‘This project demonstrates that there’s a viable business plan for communities to build wind farms on a small scale all around Australia in rural and regional areas and it will generate income and jobs.’

Simon Holmes à Court, Chairman of Hepburn Wind said, ‘Australians love renewable energy. With the passage of the carbon legislation this week, many other regional communities will benefit from the transformation of our energy sector.’

The wind farm is located on the property of long time Leonards Hill farmers, the Liversidge family, who, as well as growing potatoes and cattle, are now wind farmers.